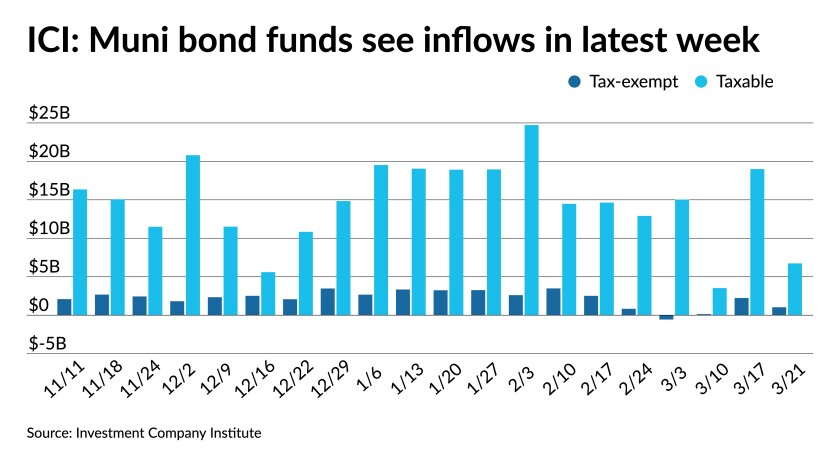 The $2 trillion proposal, combined with the shortened week and the arrival of the second quarter, are overshadowing the market, according to Anthony Valeri, director of investment management at Zions Wealth Management.

“It’s tough to get a clean read today with volume light from people out and some quarter-end rebalancing trades possibly having an impact,” Valeri said.

Overall, the expectations for lower inflation is helping both longer-term taxable and tax-exempt bonds, he said.

“Rebalancing trades in the taxable bond market, and buying long-term taxable bonds after what is shaping up to be one of the worst quarters on record for high-quality taxable bonds, may be responsible for that,” he added.

That activity in the taxable market is spilling over to influence municipal bond pricing, according to Valeri.

“Another potential driver is that markets, both stocks and bonds, are starting to price in the magnitude of potential tax increases the Biden administration appears set to unveil,” he said on Wednesday. “Biden’s infrastructure spending package is becoming clear that higher taxes are expected to pay for almost all of the spending.”

Biden is proposing to pay for portions of the plan with a Made in America Tax Plan to set the corporate tax rate at 28% from 21%.

In the bond market, that is prompting some modest growth adjustments, such as lower growth and inflation expectations today, and in turn, supporting long-term prices,” Valeri said.

He said municipal bonds have notably outperformed taxable counterparts so far in 2021, but with valuations as measured by municipal to Treasury yield ratios at their “most expensive” since the early 1990s, munis and taxable bonds are more likely to move in sync over the near-term.

The Investment Company Institute Wednesday reported another week of inflows with $1.033 billion coming into long-term municipal bond mutual funds, after $2.234 billion the previous week, adding to the strong fundamentals in munis.

A $ 114.1 million Kentucky Asset/Liability Commission offering of general fund refunding project notes (A1) was priced on Wednesday by Morgan Stanley & Co. in the negotiated market. Bonds in 2021 with a 4% coupon were priced to yield 0.14%, while the 2027 maturity with a 5% coupon was priced to yield 0.98%.

The market closed out the first quarter of 2021 with $41.6 billion in March after a total of $56.9 billion of long-term municipal bonds issued in the first two months of the year, according to data from Refinitiv. Refundings were subdued while new-money grew.

Economy
Even though pending home sales dropped double digits and ADP’s employment report did not reach expectations, the headline numbers today should “not be concerning” as the economy is coming together in a “positive way.”

According to Karissa McDonough, senior vice president and chief fixed income strategist at People’s United Advisors, the numbers from today are not a sign of things to come.

“The economy is really coming together in a positive way, as we have appropriate fiscal and monetary policy to support it,” she said, adding that Japan is doing whatever it can to keep rates at or near zero and their inflation “has not risen at all.”

“There is some concern about rising rates but we are still near historically low borrowing rates, so I am glad the Fed is holding their ground,” McDonough said. “And we should not be afraid of inflation. Maybe the market is starting to believe the Fed, when it comes to inflation, as they are looking to be reactive when it comes to this topic.”

Pending home sales slipped 10.6% in February and for the first time in eight months, sales are down 0.5% annually.

“I think the housing market in general is coming down to a more realistic and normal level,” McDonough said. “There is still so much demand for housing, I look at it as the housing market is taking a bit of a breather,” she said, noting that the rise recently in the 10-year Treasury “might have had something” to do with the negative number for the month.

“I am not concerned about the housing market at all, it should start to get hot again in the summer months.”

This is the second month in a row that sales are down.

“The demand for a home purchase is widespread, multiple offers are prevalent, and days-on-market are swift but contracts are not clicking due to record-low inventory,” said Lawrence Yun, NAR’s chief economist. “Only the upper-end market is experiencing more activity because of reasonable supply,” he continued. “Demand, interestingly, does not yet appear to be impacted by recent modest rises in mortgage rates.”

The February drop was first reported as 117,000. Economists polled by IFR Markets expected 525,000 private-sector jobs to be added.

“Although the reported number lagged estimates, it is still a relatively big number and proves that we are heading in the right direction, and is more important than it missing the mark,” McDonough said. “At this pace [of anywhere between 500 thousand and 700 thousand] of jobs added over the next few months, the unemployment would drop substantially, to around 4.5% between 4.9% by the end of summer.”

But, according to Nela Richardson, chief economist at ADP, the labor market continues to post a “sluggish” recovery in all areas.

“We’re seeing large-sized companies increasingly feeling the effects of COVID-19, while job growth in the goods producing sector pauses. With the pandemic still in the driver’s seat, the service sector remains well below its pre-pandemic levels; however, this sector is one that will likely benefit the most over time with reopenings and increased consumer confidence.”

And the Chicago Business Barometer slipped to 0.35 in March, from 0.65 in February, according to MNI Market News.

Economists projected a reading of 60.3.

The relative midwest economy index dipped to 0.62 from 0.91.