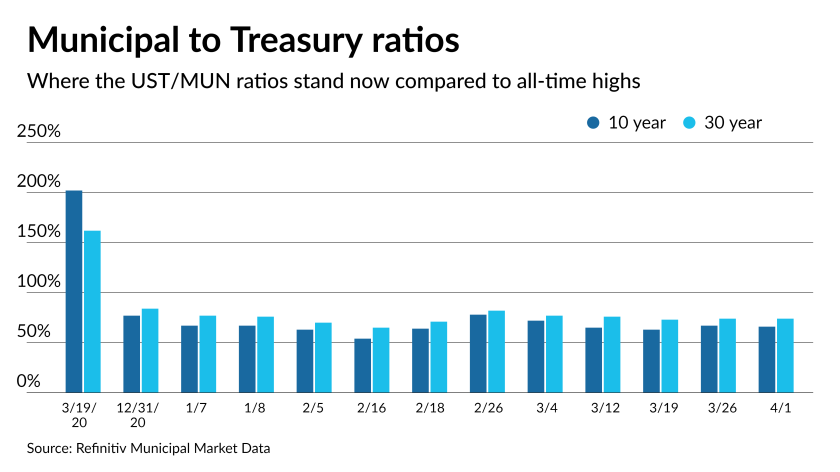 Municipals were steady to slightly stronger Thursday as the market opened with news of an unexpected rise in the weekly jobless claims number and ended by preparing for a long holiday weekend. The bond markets will close Friday at noon ET, ahead of the Easter weekend.

The triple-A benchmark scale was mostly stronger across the curve by end of trading, with long yields one to two basis points lower. The yield on the benchmark 10-year U.S. Treasury bond dropped about six basis points in late trading as stock prices climbed.

IHS Ipreo estimates volume for the upcoming week at $8 billion, up from the just over $2 billion mark seen in the previous week. The calendar is composed of $5.6 billion of negotiated deals and $2.4 billion of competitive sales.

In economic news, unemployment benefits grew 61,000 in the week ended March 27 to 719,000, which was largely unexpected, the Labor Department said Thursday. Economists predicted 680,000 jobless claims for the latest week. That compared to 658,000 claims in the prior week, which were the fewest since the middle of March 2020 during the first wave of COVID-19 infections and mandatory closures.

Though few deals sold in the primary market ahead of Friday’s shortened trading session, BofA Securities priced on behalf of the Board of Trustees of the University of Arkansas $137.1 million of various facilities revenue bonds (Aa2) for the UAMS campus.

The Washington State Convention Center Public Facilities District, meanwhile, priced $341.5 million of nonrated junior lodging tax green notes on Thursday. The sole 2031 maturity was priced by JPMorgan with a 4% coupon to yield 2.75% — 163 basis points higher in yield than the generic, triple-A scale in 2031 at the time of the pricing.

The four-week moving average remained positive at $778.254 million, after being in the green at $586.750 million in the previous week.

Economy
The manufacturing sector remains robust, which could suggest inflationary pressures, while initial jobless claims unexpectedly rose, but analysts wrote it off and insist the economy continues to improve.

The Institute for Supply Management’s manufacturing PMI grew to 64.7 in March from 60.8 in February.

Economists polled by IFR Markets expected a reading of 61.3. The latest reading is the highest since it was at 69.9 in December of 1983, according to the report.

The report “indicates that manufacturers are operating virtually all-out,” said Mickey Levy, chief economist for the U.S. Americas and Asia at Berenberg Capital Markets. “Despite strong production, rapid increases in demand and a high backlog of orders have extended delivery times to a 47-year high.”

But, commodity shortages and supply chain disruptions “are constraining production and resulting in higher prices,” he added.

“The persistently high index of prices in the ISM survey is consistent with higher costs of production,” Levy said. “We anticipate that sustained product demand as the economy reopens will lead more businesses to raise product prices in order to maintain margins, which should result in higher measured inflation.”

The new orders and employment indexes “were very strong,” according to Scott Ruesterholz, portfolio manager at Insight Investment.

“The unprecedented fiscal stimulus is boosting consumers’ demand substantially, which in turning is driving growth in U.S. factories,” he said. “Indeed, the biggest question is whether factories can meet demand, given supply chain disruptions in items like semiconductors.”

Despite the slightly lower reading in the price index, it still remains “elevated”, given high commodity prices, especially steel, according to Ruesterholz.

“Shipping costs have also begun to rise, and there are anecdotal reports of rising prices on imported goods and supply chain disruptions and higher commodity prices have increased pricing pressure, but as these disruptions fade, the pricing pressure may subside as well,” he said. “While these pressure and favorable base effects can push inflation above the Fed’s target in the near term, the duration of the overshoot remains highly uncertain.”

A shortage of labor has caused delays, too, said Sarah House and Tim Quinlan, senior economists at Wells Fargo Securities. “The delays and lack of needed materials are translating into inflationary pressure,” they wrote in a note. “The prices paid component edged down just a few ticks last month to 85.6, which keeps it near a 12-year high.”

With orders and backlogs rising, they said, “we expect manufacturers to take advantage of the pricing power that was largely absent in the last cycle and pass some costs on.”

Separately, jobless claims increased to 719,000 on a seasonally adjusted annual basis in the week ended March 27 from a revised 658,000 a week earlier, the Labor Department reported Thursday.

“While the increase breaks a three-week streak of declines, claims are still near last week’s intra-crisis low and are likely to continue trending downward as the economy reopens,” Daniel Zhao, senior economist and lead data scientist at Glassdoor said.

Continued claims decreased to 3.794 million in the week ended March 20 from a downwardly revised 3.840 million a week earlier, initially reported as 3.870 million. Economists anticipated 3.800 million continued claims for the week.

“As if we needed a reminder that nothing is a straight line along this pandemic journey, both with cases and the economy, we see new claims rising in the latest snapshot,” according to Mark Hamrick, senior economic analyst at Bankrate.

From a “broader perspective,” he said, the report shows 1.5 million fewer people collecting some form of unemployment assistance, but a still “massive” 18.2 million.

Glassdoor’s Zhao said, while the increase in claims is “a move in the wrong direction,” the overall trajectory is still “downward.”

He said he’s “optimistic that other data like Friday’s jobs report will show some more rapid improvement in the labor market.”

Ruesterholz agreed, adding he expects the March jobs report to show economic reopening is “beginning to pay dividends for the labor market.”

“Labor market improvement should pick up steam, starting in March and even more so over the next two months,” he said. “Whether it be March or April, reopening should enable job growth to return to last summer’s pace of at least a million jobs per month.”

“The drop was on the back of poor weather,” Zhao said. “While the situation is likely to improve in March, construction is yet another industry where the recovery in spending is vastly outpacing the recovery in employment.”

“The housing sector has been one of the economy’s brightest spots, and the strong pace of building permits should translate to solid residential construction activity in coming months,” he said.

Miami-Dade County, Fla., is set to price $622.2 million of water and sewer system revenue bonds on Thursday. Banc of America Securities is the lead.

San Francisco Airport Commission is set to price $560.1 million of second series revenue refunding bonds on behalf of the San Francisco International Airport on Wednesday. Series 2021A is subject to the alternative minimum tax, while 2021B is non-AMT. Series 2021C is taxable. Goldman Sachs is the bookrunner.

The University of Southern California will sell $400 million of taxable bonds (Aa1/AA// ) on Wednesday, but
university will take indications of interest as early as the afternoon of Tuesday. The taxable bullet structure is 2051 subject to a make-whole call. Barclays Capital is the bookrunner.

The Board of Regents of the University of Texas System is set to sell $400 million of refunding revenue financing system bonds, maturing as serials from 2027 to 2051. Wells Fargo Securities is the lead.

The CSCDA Community Improvement Authority is set to price $326.5 million of essential housing revenue bonds on behalf of the Altana-Glendale project. Goldman Sachs is the bookrunner.

Denver is set to price $273.8 million of dedicated tax revenue bonds on Tuesday. Morgan Stanley is the lead.

The California Health Facilities Financing Authority is set to price $217 million of refunding revenue bonds on behalf of the Lucile Salter Packard Children’s Hospital at Stanford on Thursday. Morgan Stanley is the lead.

Northern Kentucky University is set to price on Tuesday $205.2 million of general receipts bonds. Morgan Stanley is the lead.

The East Side Union, Calif., High School District is set to sell $127.3 million of general obligation bonds on Wednesday.

Louisiana is set to sell $227 million of general obligation bonds on Wednesday.