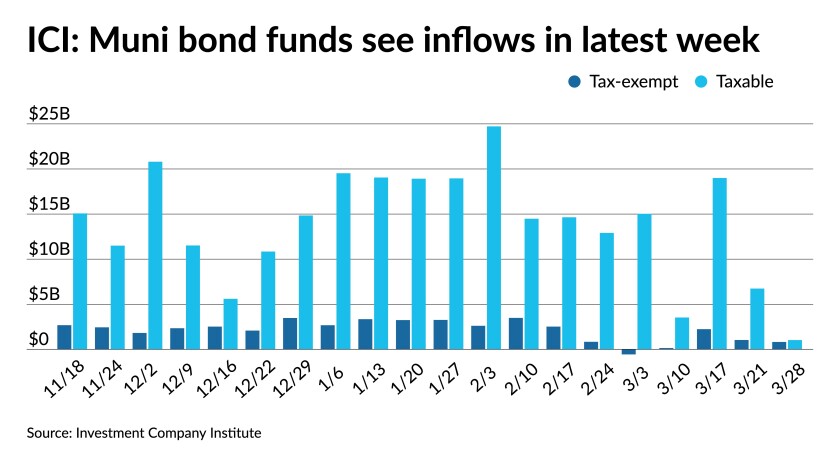 Investors welcomed a flurry of new deals from diverse credits, including four competitive deals that pushed triple-A benchmarks richer as the minutes from the recent Federal Open Market Committee meeting were released with more of the same story: rates will stay low with “transitory” inflation increases.

The Investment Company Institute reported another week of inflows, $800-plus million, as participants focus on that part of the market as an indicator of how munis will fare during tax season. So far, so good, sources said.

Municipal to UST ratios remained at levels seen since the end of February at 65% in 10 years and 72% in 30 on Wednesday, according to Refinitiv MMD, while ICE Data Services showed ratios at 64% in 10 years and 73% in 30.

The primary, which led the secondary to a firmer tone, saw deals price across the spectrum at compelling levels, for issuers at least.

Rising rates have pressured various asset classes recently, with fixed income markets in particular underperforming on a total return basis this year, according to a report from Barclays strategists Mikhail Foux, Clare Pickering and Mayur Patel.

While the muni market has generally outperformed on a ratio basis (MMD/UST ratios are 10-15 basis point richer year-to-date), total return performance for the Bloomberg Barclays Muni index is still in negative territory (-0.2%) as is the taxable muni index (-2.7%), with the high yield index up 2.4%, they noted.

However, the lagged nature of outflows suggests that they could materialize in the near future, especially as the market enters a selling period due to taxes.

“We think mutual funds have much more cash on hand compared with recent history, allowing for better management of redemptions, should they arise” and funds are getting ready to deploy their cash when an attractive opportunity presents itself.

“Hence, any municipal selloffs would likely be limited, in our view,” the strategists wrote. “We remain somewhat cautious as rate volatility might continue, but are not overly concerned about the asset class at the moment. On a tax-adjusted basis, the municipal market is one of the best performing fixed income asset classes this year, and we could continue to see strong retail demand for the asset class as a result.”

FOMC minutes
Don’t expect the Federal Open Market Committee to taper its asset purchases any time soon, according to minutes of the panel’s March meeting.

“Participants noted that it would likely be some time until substantial further progress toward the Committee’s maximum-employment and price-stability goals would be realized and that, consistent with the Committee’s outcome-based guidance, asset purchases would continue at least at the current pace until then,” the report says.

Despite the Fed’s determination, they noted overnight index swap quotes disagree with their assessment, and expect a 25 basis-point rate increase in early 2023, “about three quarters sooner than expected at the time of the January meeting.”

And while “underlying inflationary pressures remained subdued,” the upside risk to inflation grew from its previous gathering, most FOMC participants “viewed the risks to the outlook for inflation as broadly balanced.”

Among the concerns are fiscal policy could be more expansionary than believed, consumers may spend more of their savings than anticipated, “or that widespread vaccinations and easing of social distancing could result in a more rapid boost to spending and employment than anticipated.”

Others suggested factors still in play from the previous expansion that helped keep inflation down “could again exert more downward pressure on inflation than expected.” Also a concern were coronavirus variants.

The panel expects a temporary jump in inflation as a result of the “expected emergence of some production bottlenecks and supply constraints,” but inflation is expected to be slightly below its 2% target in 2022 and hit 2% the following year. But “the uncertainty surrounding the outlook as elevated,” the minutes said.

The economy will hum along, with “substantial” real GDP growth and a marked decline in unemployment as widespread vaccination allows “further easing in social distancing.”

Indeed, the FOMC saw a swifter recovery recently, with “encouraging developments regarding the pandemic, including significant declines in the number of new cases, hospitalizations, and deaths over the intermeeting period as well as a pickup in the pace of vaccinations.”

And while these signs led participants to up economic projections in the recent Summary of Economic Projections, “economic activity and employment were currently well below levels consistent with maximum employment.”

Separately, monetary policy “is likely on hold for some time,” Federal Reserve Bank of Chicago President Charles Evans said in a speech Wednesday.

“I expect monetary policy will have to remain accommodative for some time to ensure that we meet the policy goals laid out in our new framework,” he said.

Inflation will rise in the next few months as year ago levels were hit by the coronavirus shutdowns, Evans said. “As the virus subsides and normal activities resume, demand should pick up for those goods and services that are most affected by the pandemic, pulling their prices up to more typical levels.”

While the median expectation for inflation is near 2%, “after years of underrunning our target, in my view those increases and, down the road, some even higher rates of inflation are needed to get inflation to average 2% and to solidify inflation expectations about that number,” Evans said.

The international trade deficit swelled to $71.1 billion in February from a revised $67.8 billion in January, the U.S. Census Bureau announced on Wednesday.

“The U.S. trade balance widened to a record in February, as both exports and imports were weak during the month, but a larger decline in exports caused the deficit to widen,” according to Jay Bryson and Shannon Seery, economists at Wells Fargo Securities.

Logistics and transportation bottlenecks are “disrupting trade flows” and “adding to lengthy supplier delivery times,” they said, but as congestion eases, trade is expected to “pick up” this year.

“But as the U.S. economic recovery is generally outpacing many of its major trading partners, we look for imports to continue to outpace exports in the near-term,” they said. “Net exports will therefore provide a drag on gross domestic product growth this year.”

Also, consumer credit climbed $27.6 billion in February, after rising a revised $90 million in January, first reported as a $1.3 billion decline, according to the Federal Reserve.