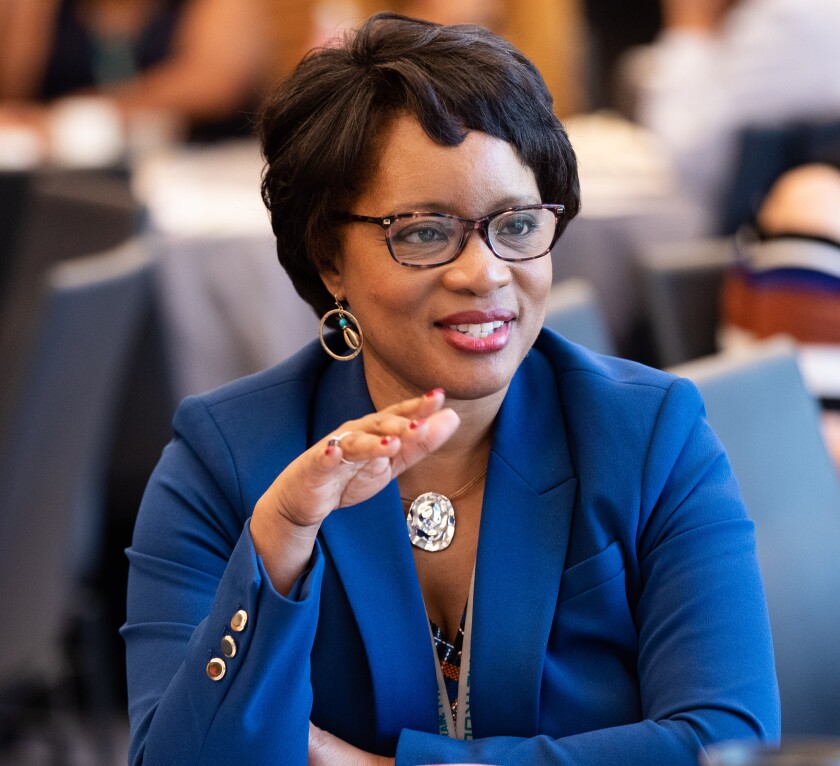 Stephanie Wiggins has been tapped to head the Los Angeles County Metropolitan Transportation Authority as the transit agency struggles to recover from pandemic-driven ridership losses.

As LA Metro’s CEO, Wiggins will manage a budget of nearly $7 billion and oversee up to $20 billion in capital construction projects. The agency has 11,000 employees that transport more than a half-million boarding passengers daily on a fleet of 2,200 buses and six rail lines consisting of 98 miles of light and heavy rail lines.

“It is an incredible privilege and honor to be given the opportunity to lead LA Metro, a key job generator of the region, and to center it in equity and continue the work of reducing the impact of climate change,” Wiggins said after Thursday’s unanimous board vote to appoint her to the position.

She will take over between May 30 and June 14, and earn $400,004.80 annually in a four-year contract with two one-year options to renew at board discretion.

Wiggins — who LA Metro board member and county supervisor Hilda Solis described as someone who sees obstacles not as challenges, but opportunities — noted the system has experienced a significant drop off, but less of a decline in ridership than other major cities indicative of how important it is to county residents.

The city reduced service during the pandemic and doesn’t expect to resume full service until September.

LA Metro received ratings of AAA from S&P Global Ratings and Aa1 from Moody’s Investors Service when it priced $325 million in sales tax revenue bonds to pay for rail projects in a competitive deal on March 30. Both assigned stable outlooks.

There has been a clamor to lure Wiggins back for the CEO job after current CEO Philip A. Washington announced on Feb. 3 he would be stepping down after six years in the position, according to Metro board members.

Glendale City Councilman Ara Najarian, who is second vice chair of the LA Metro Board and chair of Metrolink’s board, is among those who received calls from people asking if LA Metro “could get Stephanie back.”

Wiggins, who considers Washington a mentor, was deputy CEO in 2018, before she left to become CEO of Metrolink, a 538-mile passenger rail system in Southern California that traverses six counties.

She was the first African-American and female to lead that 28-year-old organization where she managed a $793 million budget and 282 full-time employees. She will be the first woman to head LA Metro.

“My greatest accomplishment at Metro has been the development of people,” Washington said.

The best CEOs build on the work of their predecessors to take an agency to new heights, according to Washington, who believes Wiggins will do that and “be the best CEO LA Metro has seen.”

During her tenure at LA Metro, she was instrumental in helping to get Measure M, a half-cent sales tax extension expected to bring in more than $120 billion over 40 years, approved by county voters in 2016, Los Angeles Mayor Eric Garcetti said.

That funding, along with Measure R, another half-cent sales tax, of which Fitch Ratings said 85% has already been tapped to support existing bonds, is providing the funding to build out the rail system ahead of the 2028 Olympic Games. LA Metro and Garcetti have promoted a program of completing 28 projects improving the rail network by then.

“We welcome you back with open arms,” said Garcetti, who chairs Metro’s board. “There was unanimous support for you on this board. You will deliver the equitable transportation system of the future.”