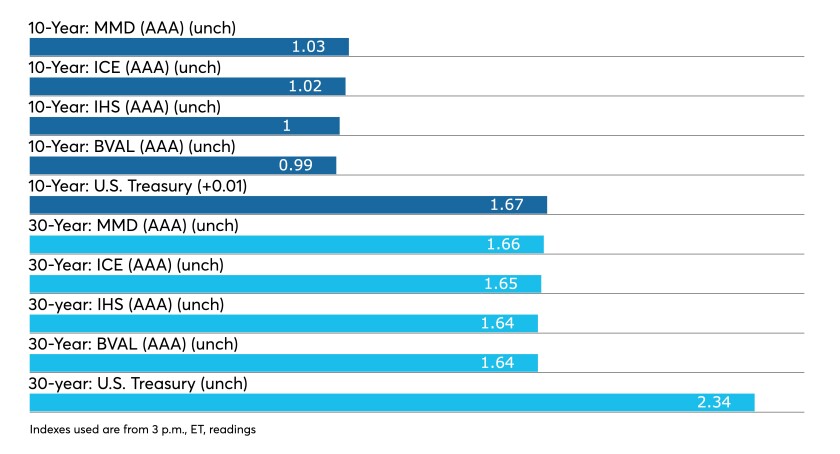 Municipal bonds were steady Monday ahead of a smaller, taxable-focused calendar, while U.S. Treasuries rose slightly after auctions and equities took a day off from breaking records.

The week opened up with yields 10 to 15 basis points lower from the start of the month, “but that isn’t denting buyer enthusiasm,” said Kim Olsan, senior vice president at FHN Financial.

“There appears to be enough fair value for inquiry to be involved and certainly from a seller’s perspective (primary or secondary) rates are rate-friendly,” she said. “Although relative value is a challenge, the market seems to have accepted and adjusted to the fact munis are set to outperform, as least in the near-term.”

Ratios aren’t budging as municipal to UST outperformance continues. The 10- and 30-year benchmarks closed at 62% and 70% on Monday, according to Refinitiv MMD while ICE Data Services had the 10-year at 61% and the 30 at 71%.

“All these moves by the rating agencies, moving whole sectors into stable or positive, individual credits such as New Jersey, Connecticut and the NY MTA getting upgrades, it is really making a compelling case for the asset class,” a New York strategist said Monday. “We’re coming into a time in which state and local governments are well positioned to invest in infrastructure in a real way. Remains to be seen whether and when Biden’s infrastructure package comes to life, but the infrastructure story has been told and anyone from corporate America to insurance companies to investors abroad know they can find value in munis.”

The typical lack of new-issues pricing on a Monday and the quiet trading held triple-A benchmarks at Friday’s levels.

What say do markets have in monetary policy?
Can the financial markets force the Federal Reserve to raise interest rates? Analysts do not agree.

“The rate options market tends to expect a more rapid return to normal, less accommodative policy during the early stages of a recovery and underprices the potential for cuts in the face of economic slowing,” she said.

“To the extent the market perceives the need for a rate hike prior to a Federal Reserve bank meeting and the Fed knows it is unlikely to be raising rates, the Fed generally ‘talks the market’ off the ledge prior to the meeting,” he said. “The Fed in general does not like to surprise the bond market with an unanticipated move rate.”

But Hank Smith, head of investment strategy at the Haverford Trust Company, disagrees. “If we see a substantial move higher, it will most likely be because the economy is running hot — an increase in the velocity of money and inflation picking up at a rapid pace,” he said. “In this scenario, the market is telling the Fed that they are behind the eight ball. This certainly can happen.”

People’s United’s McDonough added, “The idea that the interest rate options market has the power to force changes in monetary policy is demonstrably false, and suggests that the four hikes priced in through 2023 will not happen if [Fed Chair Jerome] Powell and fellow policymakers are to be believed.”

She pointed to 2013, when the Fed suggested it would taper its bond purchases, and it “created a full-fledged panic sale in the Treasury market, that’s a perfect example of bond investors collectively attempting to force the hand of the Fed and failing.”

The market will eventually fully price in the Fed being “entirely on hold until the economy is fully recovered,” McDonough said. The Fed taking a reactive stance may result in longer rates “moderat[ing] to a degree.”

“We are already starting to see bond investors coming back into the fold of the idea ‘don’t fight the Fed,’ with the recent rally in longer term securities,” she said. “The size of the Treasury market investor base has not, and will likely not, become a determining factor in Federal Reserve policy tweaks.”

Commerce’s Colbert believes the market will be correct “sooner than it traditionally has been.” Historically the forward interest rate curve in a recovery is “always” signaling the potential for a rate hike while the forward curve is “generally” overly optimistic, but “eventually, it gets the forward path of interest rates just about exactly correct.”

Since recovery from the COVID crisis “has been consistently stronger and faster than one would have initially expected,” he said, “the forward market is likely to be ‘more correct sooner’ than it was in the previous recession.”

The Fed will see at least the possibility of an interest rate hike and some reduction in monetary accommodation “sooner” than they currently think.

Longer-term rates are likely to stay anchored “near” zero, Colbert believes, while the yield curve will steepen.

“One should note that a steepening yield curve is viewed positively by the Fed and is a large component of the leading economic indicators,” he said.

“Eventually even the two-year Treasury will signal some likelihood of a Fed rate hike (while there is none at the moment),” Colbert said, but it could possibly be “much higher” by the end of the year.

While the Fed expects to keep rates anchored near zero through 2023, Haverford’s Smith sees economic conditions improving quicker. And the Fed will “likely need to raise rates sooner than that.”

“This is a much more probable scenario,” he said. “We think they will find themselves in a position where they will have to change.”

“I expect a return of the economy to pre-pandemic levels will likely take longer than many private forecasters expect,” he said. “With labor-market slack still significant, and inflation still below the Federal Reserve’s 2% target, my perspective is that the current highly accommodative stance of monetary policy is appropriate.”

Despite a third of Americans being at least partially vaccinated, he said, “there are still significant problems that need to be overcome.”

Speaking virtually at an event hosted by the Newton-Needham Regional Chamber on Monday afternoon, Rosengren said, “I am not as worried inflation will be substantially higher and I think it’s unlikely we will have trouble getting it up to 2%,” while admitting “there is lots of uncertainty around this topic.”

In the next two years, he is “hopeful” unemployment will drop to 4%.

N.Y. Fed: inflation, spending expectations up
Median inflation expectations climbed 0.1-percentage point in March for both a one-year and three-year outlook to 3.2% and 3.1%, the Federal Reserve Bank of New York said on Monday. Both have risen steadily in the past five months and are now the highest they’ve been since mid-2014, according to the Fed.

Estimates for the one-year outlook on earnings growth slipped to 2.0% from 2.2%, while median expected household income gained 0.4 percentage points to 2.8% in March.

Median household spending growth ticked up 0.1 point to 4.7% in March, the highest since December 2014.

The State Public Works Board of the State of California (Aa3/A+/AA-/) is set to price $359.1 million of lease revenue bonds, 2021 Series B. Loop Capital Markets will run the books.

The Board of Regents for the Oklahoma Agricultural and Mechanical Colleges Oklahoma State University (/AA-/AA-/) is set to price $104.3 million of taxable general revenue and refunding bonds, Series 2021B, serials 2021-2036, terms 2041, 2045. RBC Capital Markets is lead underwriter.

Board of Regents for the Oklahoma Agricultural and Mechanical Colleges Oklahoma State University (/AA-/AA-/) is also set to price $76.1 million of tax-exempt general revenue and refunding bonds, serials 2021-2041, terms, 2046, 2051, on Wednesday. RBC Capital Markets will run the books.

On Wednesday, gilt-edged Delaware is planning to sell $293.1 million of GO bonds.

This Week’s Hidden Gems: (HDSN)(JBT)
How many stocks should I buy?
How You Can Make Money with Options and Still Stay SAFE
Focus on Consistency NOT on Hitting Home Runs on Your Trades
Small Account Options Strategy with a Big Return on Investment