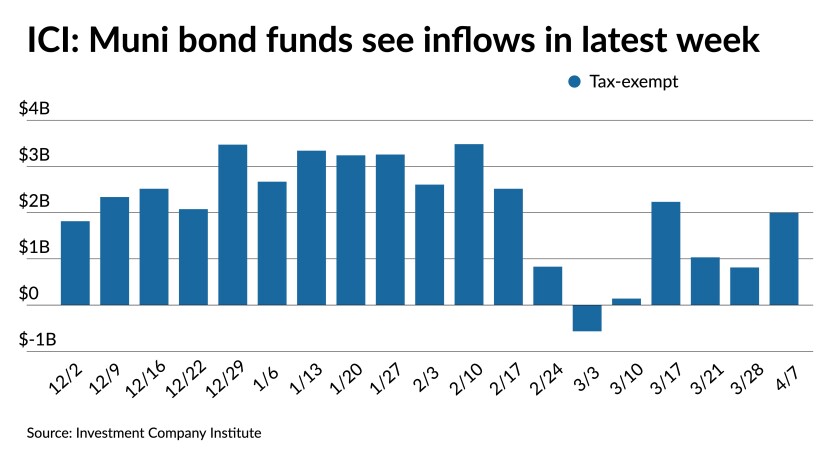 The Investment Company Institute Wednesday reported another week of inflows with $1.995 billion coming into long-term municipal bond mutual funds, after $813 million the previous week. This is the fifth week of inflows with only one week of outflows so far in 2021 and a total of more than $28 billion for the year.

The 30-year muni now sits comfortably below the yield on the 10-year U.S. Treasury at 1.61% on several benchmarks compared to the taxable UST at 1.64%.

Value is hard to find in the current municipal bond market, in particular in the secondary market, according to Peter Block, managing director of municipal strategy at Ramirez & Co.

“To the extent one is willing to get in the weeds, however, value can be found in smaller block sizes and/or off-the-run names,” Block said on Wednesday.

The number of line items up for sale on bid-wanted lists is running 16% above the one-year average while the par offered is about average, according to Block.

“The high prices demanded by sellers and the surplus of smaller size line items is also contributing to lower than average trading throughout,” he said. The average daily par traded over the past four weeks is $9.5 billion, which is about 92% of the one-year average, but only 83% of the two-year average, he noted.

“When you have week after week of above-average line items for sale with below average block sizes, it’s tough to find value and put the cash you have coming in to work,” Block said. “That is a lot to wade through, which becomes difficult for all but the most sophisticated accounts to find that value,” and contributes to the decline in trading volume.

Beige Book: Economy growing faster
The economy grew faster from late February through early April — at a “moderate pace” — while consumer spending increased,” with a possible rise in inflation in the near term, according to the Federal Reserve’s Beige Book released on Wednesday.

“Reports raised the possibility that inflation could increase in the coming months,” the report said. “Most manufacturers and one retailer reported steep input price increases.” It noted that some retailers had already passed higher costs on to consumers.

The report showed some of the effects of the economy reopening as vaccination progresses, with leisure and travel growing.

The report “confirms the stream of positive news from current economic indicators,” said Steve Skancke, chief economic advisor at Keel Point. “Consumer confidence was up significantly which was further reflected in stronger consumer spending and the likely beginning of pent-up consumer demand finding its way into the market place. Manufacturing and service sector activity was also up significantly in March as a result of positive news on COVID vaccinations and working to meet increased consumer demand.”

While “inflation has yet to materialize,” he said, “we know there are price bumps in the re-opening and meeting pent-up demand, especially in what has to be paid for building materials, gasoline and hiring lower wage personnel.”

But he expects “this will all settle out by the end of the year” with inflation between 2.1% and 2.6%.

“All of this supports the Fed’s monetary policy goals and shows how well the fiscal support is working to spur the economy forward in 2021,” Skancke said.

“Retail sales strengthened in the first quarter at two of three firms, advance travel bookings increased, and sales were either stable or up modestly among contacts in the manufacturing sector and in software and IT services,” the report said. Compared to a year ago, “more than half of manufacturers and two of three retailers saw robust gains.” Air travel had yet to recover.

The report noted most districts saw “modest to moderate” employment gains, with manufacturing, construction, and the leisure and hospitality industries hiring the most. “Hiring remained a widespread challenge, particularly for low-wage or hourly workers, restraining job growth in some cases,” the report said.

Expectations for employment “were generally bullish.”

There was “slight” acceleration in wage growth, especially in manufacturing and construction, where it was reportedly “particularly difficult” to attract and retain workers.

Separately, import prices jumped 1.2% in March after a 1.3% gain in February, while export prices soared 2.1% after a 1.6% increase a month earlier.

Economists expected import prices to rise 0.9% and exports to grow 1.0%.

Christine Albano contributed to this report.