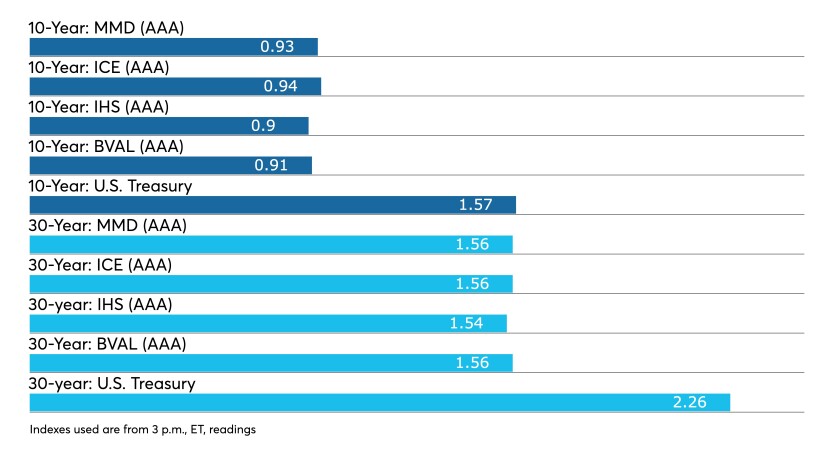 Municipals were firmer in spots in secondary trading but benchmark curves mostly held steady after a strong week that moved yields by as much as 10 basis points lower. U.S. Treasury weakness early Friday morning hit the breaks for munis, which will see an elevated bond volume next week with some marquee names that may test current yields.

Sub-1% 10-year municipals and low ratios may also test investor appetite for the asset class but it is hard to ignore the strong fundamentals and substantial fund flows in the backdrop.

“There are very few clouds on the horizon, in our view, and we think that ratios will remain depressed over the next several months, while credit spreads might continue grinding even tighter, especially for credits and sectors that will benefit the most from economic recovery, and return to normal,” strategists at Barclays Plc wrote in a weekly report. “Moreover, if Treasury rates continue selling off, ratios might be helped even further, in our view.”

The total potential volume for next week is estimated at $10.194 billion, up from total sales of $7.078 billion this week.

There are $7.044 billion of municipal bond sales scheduled for negotiated sale next week versus a revised $5.168 billion that were sold this week.

A bullish view on taxable munis
Through the end of March taxable index spreads have tightened 33 basis points, outperforming long-dated corporates, with the spread differential between the two indexes stretching to the widest level in recent history, Barclays noted in the report authored by Mikhail Foux, Clare Pickering and Mayur Patel.

“After such a strong rally, a natural question to ask whether is there any value left in taxables,” they asked.

A closer look at the index performance, both outright and versus corporates, “proves that the AAA part of the market has been the main driver of index performance at least in comparison with credit investment grade.”

Triple-A munis “are trading well-through AAA corporates (although there are not too many of those); lower-rated credits also rallied, but are still trading somewhat wider than similar-rated corporates, and that is where we could still see further spreads tightening, as investors are getting more and more comfortable with current levels,” Barclays noted.

“In particular, the BBB rating bucket was helped by the rally in high beta credits that were benefited by the money received through the American Recover Plan, including credits in Illinois and NJ, which saw their rating outlook improve, while the single-A bucket was helped by the spread tightening of the NY MTA,” Barclays strategists wrote. “Aside from state GOs and leasing, transportation was one of the better performing sectors this year, with most others tightening in line with the index.”

“Consequently, trading down in credit quality is still the trade that makes sense, in our view, as wider names, might compress even further,” they said.

When tax-exempts become as expensive versus Treasuries as they are right now, the tax-exemption might become less relevant to investors, even if tax rates increase, and some investors might simply consider buying USTs instead.

“To us, buying taxable munis make a lot more sense — they not only provide yield pick up over Treasuries, but also additional tax benefits, especially in high-tax states like California and New York, which are also still trading at somewhat attractive levels in the context of the current taxable index levels,” they wrote. “Even after adjusting for taxes, yields of taxable munis are much more attractive than yields of tax exempts, which has not happened until recently.”

Delayed Alabama prison deal still to come, despite controversy over Barclays’ role
Also next week, Barclays Capital is expected to price the Alabama Department of Corrections’ taxable senior secured private activity revenue bonds, perhaps as early as Monday. Public Finance Authority of Wisconsin is the conduit issuer on the deal.

On Thursday, the American Sustainable Business Council and Social Venture Circle said they were revoking Barclays membership and returning its dues over the prison underwriting and voiced their opposition to the deal.

“We abhor the hypocrisy represented here and renounce the continued investment in the broken, unjust system of incarceration of this country,” said MaryAnne Howland, Board Chair of ASBC, Founder and CEO of Ibis Communications. “Thousands of businesses like mine and those represented by ASBC and SVC stand in opposition to Barclays or any other private sector company profiting from the injustice of the U.S. prison system.”

The $850 million issue will build two new prisons for male inmates and will be run by ADOC but owned by a private company.

The deal, which was fluid in nature, was pushed back from late this week. The final amounts of Series 2021A taxables to be sold in a public issuance in compliance with Rule 144a of the Securities Act to qualified institutional buyers and Series 2021B taxables that are going into the private placement market with institutional investors in compliance with Section 4(a)(2) of the Securities Act will depend on relative pricing between the two markets.

“The ADOC considers these two new facilities to be essential to our public infrastructure needs, and upon beginning the process of taking occupancy, the ADOC will be solely responsible for prison operations. To be clear, these are not private prisons,” the state said in an emailed response to The Bond Buyer. “The ADOC is also pleased that the credit rating agencies have recognized the state’s creditworthiness in the preliminary ratings that have been provided for the projects’ financing.”

The state said the sale was a “transformational initiative” that aims to help ADOC provide a safer and more secure correctional environment to better serve inmate rehabilitation and improve the quality of life for inmates and staff.

The School Board of Orange County, Florida (//AA/) is set to price $108.1 million of certificates of participation. J.P. Morgan Securities LLC is head underwriter.

On Wednesday, the Metropolitan Council, Minnesota (Aaa/AAA//) is back in the competitive space with $109 million of taxable general obligation bonds in three deals at 10:30 (GOs), 11 (Park bonds) and 11:30 a.m. (wastewater revenue refunding bonds)

Economy
The housing market rebounded from winter weather issues while consumer sentiment rose less than expected in the preliminary April read. Builders have been able to pass higher costs on to buyers since supply levels remain below demand.

Housing starts soared 19.4% in March, following an 11.3% decline in February, while building permits rose 2.7% in the month after an 8.8% drop a month earlier.

“The inventory of homes for sale is very low, and homebuilders are ramping up construction in an attempt to meet demand,” according to Mickey Levy, Berenberg chief economist for the U.S., Americas and Asia, and a member of the Shadow Open Market Committee. “Costs of construction have risen significantly, as a doubling of lumber prices and higher costs of other building materials have risen. With demand strong and inventories low, contractors are passing their higher costs to homebuyers, who are readily paying up.”

It has been widely reported that inflation will jump in the next few months based on low numbers from a year ago. The question has been will costs be passed on to consumers and will they be transitory increases or a sign of sustained price pressures, which would lead the Federal Open Market Committee to remove accommodation.

“The third round of fiscal stimulus, looser virus-related restrictions, and fading impacts from severe winter weather in February” all helped boost consumer spending, according to Rhea Thomas, senior economist at Wilmington Trust.

Indeed, consumer sentiment picked up in April, but not as much as expected.

The University of Michigan’s preliminary April consumer sentiment index grew to 86.5 from 84.9 in March, while the current conditions index gained to 97.2 from 93.0, and expectations held at 79.7.

Economists expected the main index to rise to 89.0, current conditions to 96.3 and expectations to 83.6.

The New York region’s service sector showed expansion for the first time since the pandemic, with the Business Leaders Survey business activity index soaring to positive 30.2 in April from negative 4.8 in March.

The employment index also turned positive for the first time since the pandemic, while price increases were termed “significant,” with prices paid holding at its highest level in two years, and the prices received index rising, and expectations that prices will go higher in the future.

Chip Barnett contributed to this report.