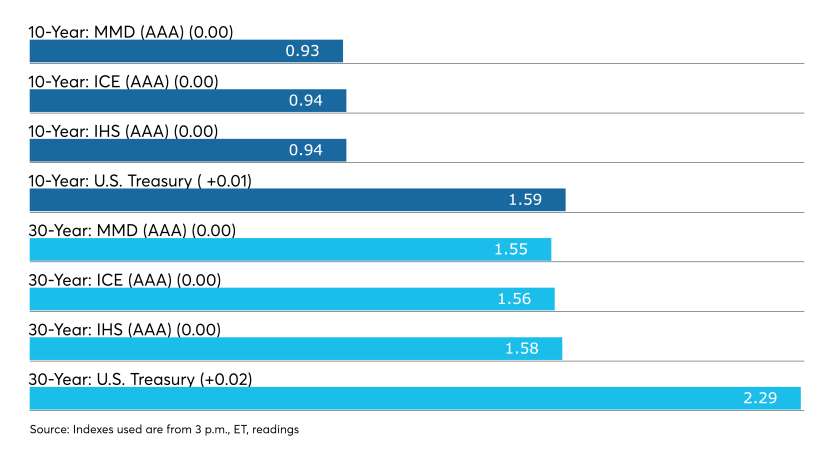 Municipals were flat as the market was salivating in anticipation of the arrival of billion dollar deals from three large specialty states as part of the week’s planned $10 billion bounty.

No large deals were priced in the municipal market on Monday as attention focused on three separate billion-dollar deals planned for Tuesday from issuers in California, New York and Connecticut.

The generic, triple-A general obligation scale was unchanged between 2022 and 2051, according to Refinitiv Municipal Market Data.

“It’s a quiet Monday and munis are trading sideways,” a New York municipal manager said. “It’s flat, with no change.”

While he said the poor percentages of municipals to Treasuries is “hurting” retail investors, institutions continue to pour cash into the municipal market.

“There are consistently continued inflows into muni bonds,” he noted, pointing to the latest $2.25 billion infusion into bond funds in the week ended April 14, as reported by Refinitiv Lipper.

He said this week’s upcoming slate of $10 billion would do little to fully satisfy the overwhelming demand for tax-exempt paper.

“We do have deals coming, but I don’t think that supply is going to be anything difficult to manage at all,” the manager said, adding that new issuance remains in heavy demand.

All eyes were on Tuesday’s large deals coming from the states of California and Connecticut as well as New York’s Triborough Bridge & Tunnel Authority.

The New York manager pointed to all three deals as attention-grabbing for their specialty-state nature as well as the TBTA deal for its popularity as a familiar issuer and the California and Connecticut deals as “improving credit” situations.

“What we are dealing with is low rates, but there is a lot of money out there to put to work — and that story hasn’t changed,” the manager said.

Federal stimulus could substantially boost credit and help accelerate spread narrowing, while the infrastructure bill may provide additional catalysts to support the municipal market, according to a new weekly municipal report from Nuveen.

“While many provisions would impact the municipal market indirectly by driving economic growth and tax revenues, specific municipal bond provisions have not yet surfaced,” he said in the report. “Higher tax rates would pressure Congress to reverse current limitations on state and local tax (SALT) deductions as a concession,” Miller continued, adding that reinstating tax-exempt advance refundings for municipal bonds may be included in new legislation as negotiations progress.

Both the 10 and 30-year municipal-to-Treasury yield ratios are well below their long-term historical averages, according to Miller.

“Given the optimistic outlook for economic growth, at least a temporary boost in inflation and heavy Treasury bond supply, Treasury yields are quickly approaching most of the existing year-end forecasts, which fall in the higher end of the 1.75% to 2.00% range,” he said in the report.

“We believe the recent move from a sub-1% yield was probably the most painful part of the normalization process for fixed income investors, and the 10-year rate now embeds most of what we anticipate for growth, inflation and deficit spending,” he said. “We still envision Treasury rates edging moderately higher throughout 2021, but at a much slower pace.”

This has led to outperformance that is naturally reflected in declining municipal-to-Treasury ratios, Miller added.

“High-grade municipals are more sensitive to the general interest rate environment because they are more highly correlated to the triple-A, MMD curve and the Treasury markets,” he said.

Primary market
The arrival of three of the week’s largest deals was on the minds of municipal investors Monday.

On Tuesday, California plans to sell $1.09 billion of various purpose general obligation refunding bonds (Aa2/AA-minus/AA) in a forward delivery deal being priced in the negotiated market by Goldman, Sachs & Co.

Meanwhile, in the Northeast, large New York and Connecticut issuers will be in the spotlight as the Triborough Bridge & Tunnel Authority and the state of Connecticut both come to market.

Connecticut will sell $1.03 billion of special tax obligation bonds (Aa3/A-plus/A-plus/AA-plus) for transportation infrastructure purposes, with Series A being $875 million of new money and Series B being $12 million of refunding bonds. Series C, meanwhile, will consist of $145 million of the same bonds in a forward delivery. Goldman is lead manager.

To raise or not to raise: Inflation questions
It may be next year before we have the answer to whether current inflationary pressures are transitory, analysts said.

“We’ll see higher inflation throughout 2021 due to pent-up demand, supply chain bottlenecks, capacity constraints, and because of the low baseline set by declining price levels during Spring 2020,” according to Greg McBride, chief financial analyst at Bankrate.com. “Whether we have higher inflation on a sustained basis beyond this year remains to be seen, but I’m not worried about 1970’s style inflation.”

Matt Miskin, co-chief investment strategist at John Hancock Investment Management, agrees this inflation cycle will be transitory. “Base effects, supply constraints, and significant fiscal stimulus makes the next couple quarters the time for upside risk to the inflation outlook and from there, it likely starts to decelerate,” he said.

For the past decade or so inflation has been below the Federal Reserve’s 2% target, and some experts expect that once the pandemic is done, the same factors that held back inflation previously, will remain prevalent.

“We have been in an historically low interest rate environment for some time now, and once we get through the effects of the pandemic, interest rates will rise moderately by 2023,” said Elaine Brennan, executive vice president, public finance for Roosevelt & Cross, who was a trader in the late 1970s and early 1980s — a period of extremely high inflation and quick and dramatic spikes in interest rates.

“The Fed’s approach to controlling inflation has evolved considerably over the past 40 years, in the context of a more sophisticated global economy,” Brennan said.

The latest stimulus, she believes, will not “be a direct cause of high inflation,” since “the Fed has the tools they need to monitor the effects of the package and can tighten the reins when necessary, before inflation gets out of control.”

“The last quarter century has seen persistently sub-2% inflation, so targeting above to 2% inflation for some time makes logical sense after such a long period of missing their desired target,” he said. “If you are ever going to let the economy run ‘hot,’ when emerging from a global pandemic and with significant unemployment is the time to do it.”

Bankrate’s McBride agreed. “After struggling to get inflation above 2% for more than a decade and with the economy running 8 million jobs below pre-pandemic levels, shifting strategy to prioritize full employment is hard to argue with.”

But it may have its costs. “When we look back five or 10 years from now, it may also signify the turning point that ended the bond bull market.”

But deflation remains a risk.

“We may be seeing the greatest inflationary pressures of the cycle based on supply constraints in the next 3-6 months,” Miskin said, but “the more the pandemic gets under control the more people can get back to work and supply chain stress can be relieved.”

In the longer term, “Deflation is not off the table,” he added, “because demographics, significant debt levels, globalization, automation/technology innovation all suggest disinflation (at a minimum) could be back in the next several years.”

Still, if the Fed were choosing, they’d prefer inflation to deflation, McBride noted, but “anything more than modest inflation over any length of time would be problematic for the economy.”

While the consumer price index may run as high as 4.0% in the next couple of months, McBride see it at 3.5% in the third quarter and 3.2% in the fourth quarter. “The Fed references the Personal Consumption Expenditures Index, which tends to run half a percentage point or more below the CPI,” he said. “The headline CPI numbers will get everyone riled up, but it may be 2022 before we can determine if prices are rising on anything other than a temporary basis.”

Miskin also believes that headline inflation could reach 2.5% to 3% on an annual basis for the next three to six months, but “from there, it likely starts to decelerate.”

Stimulus and reopening the economy after a global pandemic made this period quite unusual, so “what we are experiencing will likely be more of an outlier than a longer-term trend,” he said. “As we move into 2022, the comps are going to be higher and base effects will turn from a tailwind to a headwind.”

Primary market
Other large deals pricing this week include the Illinois Finance Authority, which is set to sell $501.98 million of Carle Foundation fixed period revenue bonds on Thursday. Barclays Capital is lead underwriter.

The California Health Facilities Financing Agency (Aa3/AA-/AA/) is coming to market with $365 million of Stanford Health Care taxable bonds and $157.2 million of tax-exempt bonds. Goldman Sachs is set to price the deals on Wednesday.

On Wednesday, the Metropolitan Council, Minnesota (Aaa/AAA//) is back in the competitive space with $109 million of taxable general obligation bonds in three deals.

Top Stock Picks for the Week of June 17, 2019
How to Find Unusual Options Activity in ThinkorSwim (Sizzle Index)
5 Perfect Earnings Charts
Getting started with dividend investing
Gilead’s Stock is on Sale: Should You Buy?