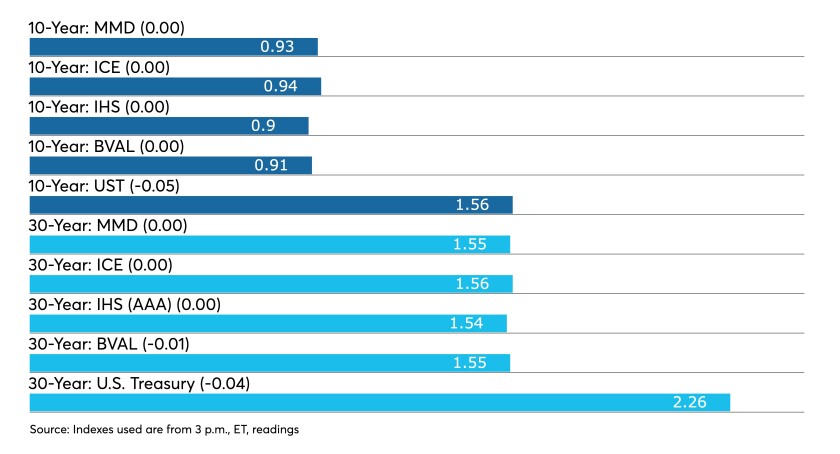 Municipals were steady as the market digested large deals from California, New York and Washington state in a week heavy on state credits while Treasury yields fell and stocks were mixed.

It was all about the primary Tuesday with the Triborough Bridge and Tunnel Authority MTA deal repricing as much as 17 basis points lower following strong demand, even with Comptroller Thomas DiNapoli saying the MTA capital numbers “don’t add up.” California forward delivery general obligation bonds were repriced to lower yields while Washington State and Rhode Island sold competitively at yields on point with their ratings, but also constructive that investors wouldn’t give in to sub-1% for the credits. Ten-year spots on those competitive deals hovered around 1% while the triple-As are at 0.90%-0.94%.

With a backdrop of steady scales on generic, triple-A general obligation bonds, demand on the buy side of the municipal market on Tuesday continued to be fueled by the presence of large new issues, and potential for rising taxes, according to John Mousseau, president and chief executive officer at Cumberland Advisors.

“In other words, it’s business as usual for the muni market lately,” Mousseau, director of fixed income at the Sarasota, Florida, investment management firm, said. “There is no question in my mind that the market smells a tax increase in the federal marginal tax rate coming,” he added.

The Triborough Bridge and Tunnel Authority (/AA+/AA+/AA+) priced $996 million of payroll mobility tax senior lien bonds in two series for MTA bridges and tunnels. The deal was repriced to lower yields by as much as 17 basis points.

Economy
The services sector in the Philadelphia region expanded in April, with employment steady and price pressures still in play, as respondents see better times six months ahead.

With this month’s report, the annual revision was released. March’s regional general business conditions index was first reported as 38.6 and the firm level was at 33.5.

“The Philly Fed nonmanufacturing index showed that the economic recovery continues,” according to Ed Moya, senior market analyst, at OANDA.

Although remaining positive, some indexes were lower than last month’s revised numbers.

“Both price and wage pressures are percolating,” said Moya. “Complicating the outlook for the three-state area was a rise in COVID cases across Philadelphia and some of the lost momentum with prices received and firm activity should be temporary.”

A special question about wages showed almost 39% saw wages and compensation grow in the past three months, with about one-third having adjusted budgets for wages since January, and 13% expecting to give higher raises than expected and 19% moving up plans for wage hikes.

The wage growth, along with higher prices could “excite” investors who are pricing in an eventual bond market selloff later this summer, Moya said.

The capital expenditures at the physical plant index gained to 15.8 from 9.6, while the expenditures from equipment and software index rose to 18.4 from 12.6.

On Wednesday, the Metropolitan Council, Minnesota, (Aaa/AAA//) is back in the competitive space with $109 million of taxable general obligation bonds in three deals at 10:30 (GOs), 11 (Park bonds) and 11:30 a.m. (wastewater revenue refunding bonds)

Christine Albano contributed to this report.