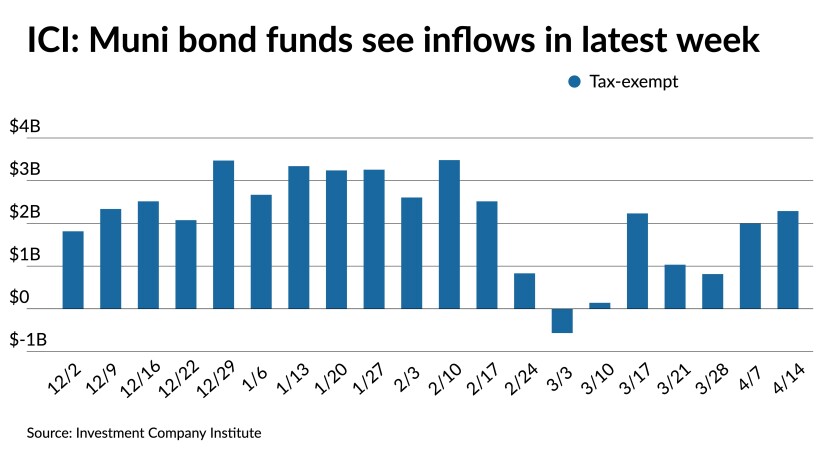 Municipals were steady on Wednesday as the focus remained on the primary with secondary trading light and high-grade municipal scales and U.S. Treasury yields both unchanged while investors again poured in billions into municipal bond mutual funds.

Triple-A benchmark scales were steady for the fourth day in a row, while municipal to UST ratios also held steady, closing at 59% in 10-years and 68% in 30-years on Wednesday, according to Refinitiv MMD, and ICE Data Services had the 10-year at 60% and the 30 at 69%.

The hearty demand for new issuance underscored the latest flow data as the Investment Company reported $2.289 billion of inflows into municipal bond funds for the week ended April 14.

The market snapped up the smaller, but still sizable deals that surfaced on Wednesday, led by a $378 million Charlotte, N.C. airport deal, as well as a competitive $287 million Denver City and County deal.

That was on the heels of devouring $3 billion in new issuance on Tuesday as deals were oversubscribed, yields lowered, and triple-A benchmarks remained steady. The market still awaits large deals from Connecticut and New Jersey after both their outlooks were boosted by various rating agencies.

A continued heavy weekly calendar, according to Lipton, could cause sentiment to shift, with a possible reversal in the rate of inflows.

“For now, however, we believe that the market will efficiently process the new-issue product, with technicals providing the tailwinds to possibly bring muni yields lower and hold ratios at frothy levels,” Lipton added.

The Investment Company Institute Wednesday reported another week of inflows with $2.289 billion coming into long-term municipal bond mutual funds, after $1.995 billion the previous week. This is the sixth week of inflows with only one week of outflows so far in 2021 and a total of more than $30 billion for the year.

The market’s strong first and second quarter performance has led to the expectation for favorable supply and demand dynamics as $350 billion of direct Federal aid to state and local governments is expected to help underpin municipal fundamentals, according to analysts at BlackRock Inc.

Besides manageable supply, the analysts expect the extension of Tax Day to help the municipal market avoid weakness that is typical in April due to investors selling securities to pay tax bills.

Looking at first quarter performance, they noted that while most fixed-income asset classes posted negative returns for March, the broad S&P Municipal Bond Index posted a gain of 0.55%.

“It was a challenging month for bond markets generally as the passage of additional fiscal stimulus and rising optimism for further reopening of the economy drove interest rates higher,” Hayes, Schwartz, and Carney wrote. Municipals, however, rebounded from their temporary value-driven correction of late February, while longer-duration and lower-credit quality municipal bonds were better performers, the analysts added.

March’s $45 billion issuance was 59% above the five-year monthly average and offered a large and diverse new-issue calendar and opportunity for investors to put cash to work at attractive levels, according to the analysts.

The average oversubscription of new deals in March rose to 6.5 times from 4.6 times in the prior month.

How municipals continue to perform in the second quarter and beyond could hinge on the prospects of additional federal aid, they added.

As President Biden’s $2.25 trillion infrastructure plan continues to unfold, the firm estimates that 80% of the municipal market will be impacted by the proposal.

The allocation of funds has to be taken in context with the recently passed American Recovery Act, which provided $350 billion to state and local governments and will have a more immediate impact on improving the fiscal health of many of the largest issuers in the municipal market, Hayes, Schwartz and Carney noted.

“Although details remain limited, it seems likely that municipal issuers will be incentivized to leverage federal funding to finance new infrastructure projects, which could lead to increased bond issuance,” they wrote.

However, any increase in supply is likely to be met with increased demand for tax shelter from both institutional and individual investors, resulting in a relatively muted impact on market performance.

“Notably, additional sources of demand could promote historically rich valuations and act as a backstop if the market were to face more adverse conditions,” they said. “While a reinstatement of the tax-exemption for advance refunding of tax-exempt debt and/or a revival of a Build America Bonds-type program would create more significant market implications, we view these as low-probability events for the near term.”

Given the past and current performance of municipals and impacts of Federal aid going forward — BlackRock is maintaining a neutral stance on duration within a barbell yield curve strategy, according to the analysts.

“We continue to hold a preference for lower-rated credits and sectors that have been more impacted by the pandemic, such as transportation, travel-related — hotel tax and airport — and healthcare,” according to BlackRock.

Fed expected to stick to script
While the markets expect the Federal Open Market Committee to liftoff much sooner than expected, analysts see no reason to raise rates this year and certainty not at the upcoming April 27-28 meeting.

“We do not think the Fed is in any mood to hike rates or even hint at the possibility that it might come in the next 12 months,” said Luke Tilley, senior vice president and chief economist at Wilmington Trust.

The Fed’s message has been “consistent,” he said, since it announced the new framework: “The FOMC needs to see three conditions met before hiking: labor market conditions consistent with full employment; inflation above 2% on a sustained basis, and inflation is expected to exceed 2% ‘for some time.’”

While this allows “room for interpretation,” Tilley said, “we don’t expect to see them met in 2021.”

And while personal consumption expenditures, the Fed’s preferred measure of inflation, will probably surpass 2% on an annual basis for “the next several months,” it’s due to last year’s price drops amid the COVID-19 pandemic “not because of strong current inflation.”

While Fed officials “have already said they’ll be dismissive of this near-term bump in the year-over-year readings,” Tilley said, FOMC projections expect inflation above 2% this year, and slightly above 2% in the following years. “We think those are too low for 2022 and 2023, but that would not become clear until much later this year and not soon enough to impact this April 2021 meeting.”

The Fed may need to keep its stance of no rate hike until 2023, said Gary Zimmerman, CEO MaxMyInterest, “lest it undermine its own policy objectives.”

But, if the economy soars, like in “the Roaring 20s that followed the influenza pandemic, the Fed may need to turn hawkish sooner,” said Zimmerman.

The combination of trillions of dollars in fiscal stimulus and a dearth of lending opportunities has left bank balance sheets “bloated,” further “deflating” interest rates on savings accounts.

“As the economy rebounds and new lending opportunities emerge, the trillions of dollars of stimulus should eventually work their way through the economy from savings to investment, paving the way for rates to rise again,” he said.

Tilley expects more inflation later this year, with vaccinations allowing consumer to tap savings and use stimulus money. “We expect those factors to drive growth in the second half of the year, push services inflation higher and contribute to stronger overall inflation, nearing 2.75% in CPI terms,” he said. “But we do expect inflation will settle back down and decelerate in 2022, enabling the Fed to keep rates as zero early next year, as the risk is to the upside.”

Zimmerman said low interest rates and trillions of dollars of government spending puts the country “at risk of inflation” and a “devaluation of the U.S. dollar,” with signs of inflation “already visible in U.S. housing prices, the equity markets, and cryptocurrencies.”

“There is near-unanimity of higher inflation in the near-term, but both the TIPS markets and consumer surveys show inflation is expected to come back down in the longer-term,” he said. “That enables the Fed to remain at zero and preach caution for the moment; should those indicators start drifting upwards the FOMC may be forced into action.”

Lynne Funk contributed to this report.