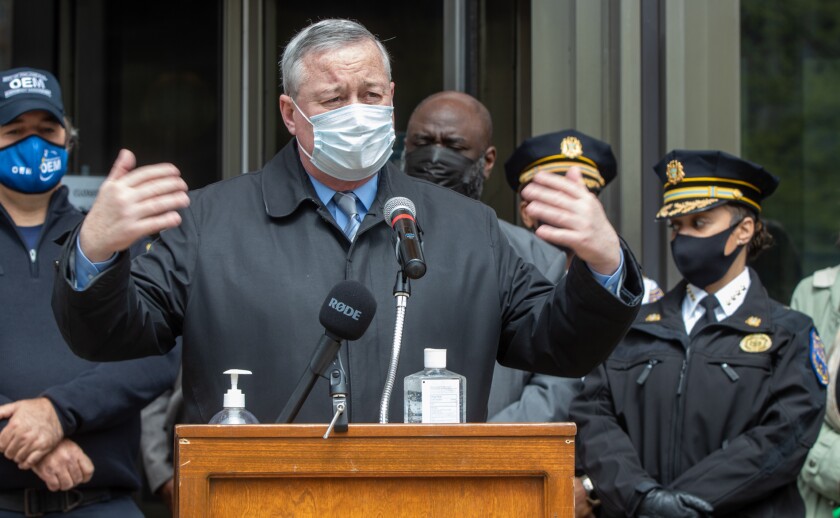 Even as they exhaled on their Zoom cameras, members of Philadelphia’s budget team winced as one over what could have happened without a fresh infusion of federal rescue aid.

“We were looking at a very ugly budget,” finance director Rob Dubow told reporters at an online briefing one day before Mayor Jim Kenney released his fiscal 2022 plan to the 17-member City Council.

Philadelphia is in store for $1.4 billion under the American Rescue Plan, which President Biden signed last month. Additionally, it expects to receive over $100 million more in targeted support through the measure.

The city had been facing a $450 million shortfall. Now it projects an FY22 fund balance of $109 million, 2.1% of revenues and down from the pre-pandemic level of $439 million. Because the balance is less than 3%, there will be no rainy-day deposit this year.

“The city is projecting a positive fund balance and that will be favorable when borrowing for capital projects,” said Villanova School of Business professor David Fiorenza.

Kenney called the federal aid “the only funding source that can be used to help with the revenue losses that we have sustained as a result of the pandemic.

“Equally important, it allows us to act on the harsh lessons from this crisis. For example, we know now more than ever, that we must plan for future disruptions and build a resilient fund balance,” Kenney told council members.

COVID-19 has killed more than 3,400 Philadelphians, according to city data. Further easing of restrictions is on hold for now after city health officials cited a 7.3% test positivity rate for the week ending April 17. About 44% of the city’s 1.6 million residents have at least one vaccination against COVID, the city reports.

Kenney’s sixth spending plan calls for $5.22 billion in operating funds and $270 million of new borrowing — its largest ever — as part of a $3.25 billion capital program for the fiscal year. Its FY22-27 capital program totals nearly $10 billion.

The package should resonate well with bond rating agencies, according to Dubow.

“I think that we will be able to talk them though our plan, how it’s financially responsible and how it makes sure we will weather the storm of the pandemic and beyond, sound financial footing when we get out of it,” he said. “So I think they’ll look at it and they’ll think that we’re being responsible financial stewards.”

“The city still has a favorable rating and outlook by the three major rating agencies,” Fiorenza said. “I would agree with their assessment as the city has a diverse revenue stream and is a hub for the Mid-Atlantic region.

“Most, if not all, cities were affected by COVID-19 in the area of lower revenues and the rating agencies know this when they assign a rating to the new debt being issued.”

The plan calls for a reduction in the wage tax to its lowest level in 50 years with the biggest such cut in more than a decade. The cut, according to Kenney, is deeper than what the city included in its pre-pandemic plan for fiscal 2022.

“This cut will help jumpstart our economy and provide relief to workers,” the mayor said.

Philadelphia also plans to restore previously planned reductions to business tax rates while the parking tax rate, after one year at 27%, will return to the pre-pandemic 22.5%.

The city expects to receive half its $1.4 billion from Washington next month, with the balance the following May. It plans to draw down the amount over five years.

Rather than target the money for particular spending, the city intends to treat the allocation as flexible spending to the general fund to fill most of the gap that the pandemic has created.

The funding enables Philadelphia to avoid tax increases and layoffs, and restore “public-facing” services such as summer pools and five-day library openings.

New initiatives, some of which reflect concerns about escalating crime, include $13 million for 911 co-responder and mobile crisis units; $2.6 million for violence intervention and community response; doubling the cultural fund to $2 million; $950,000 for a Citizen Police Oversight Commission; and more than $7 million of debt service for 115 miles of road paving.

Without the aid, Philadelphia’s gap would have spiraled to $1.5 billion through FY26.

When the pandemic escalated at the start of last year, Philadelphia projected a $749 million shortfall for FY21, or 14.7% of the prior year’s general fund spending. That placed the city on the higher end of shortfalls among 13 cities that Pew Charitable Trusts studied.

“These projections involved more guesswork than usual, especially on the revenue side, given the unpredictability of the pandemic and its economic impact,” Elinor Haider and Jason Hachadorian of Pew’s Philadelphia research and policy initiative wrote in their study.

Vulnerabilities for Philadelphia include a heavy reliance on both income taxes and nonresidents, and limited reserves. The city whittled the gap using its rainy-day fund and general fund balances from previous years.

The city, acknowledging the uncertainties, agreed to submit monthly rather than quarterly budgetary monitoring reports to its state oversight agency, the Pennsylvania Intergovernmental Cooperation Authority, throughout FY21 as part of the authority’s approval of the city’s five-year plan.

Other question marks include the evolving work-at-home dynamic among businesses. Philadelphia, Pew said, faces “a revenue loss of an undetermined magnitude from its nonresident wage tax,” depending on the degree to which suburbanites continue to work from home after their offices in the city fully reopen.

With many commuters living across the Delaware River in New Jersey, a case that could reach the U.S. Supreme Court is resonating. At issue in New Hampshire v. Massachusetts is the taxation of remote out-of-state workers during pandemic.

“The biggest challenges in the upcoming year, besides crime, will be how to attract commercial companies to have employees work in the city after working virtually from home,” Fiorenza said.

Significant projects under the five-year capital program include $317 million for paving and ramps that comply with Americans with Disabilities Act mandates; $137 million for citywide technology improvements and enhancements; $60 million for the Penn’s Landing-Interstate 95 overcap park; $50 million for master plan improvements to FDR Park in South Philadelphia; and $26.5 million for community centers.

Detroit officials withdrew $50 million from that city’s rainy-day fund and did not make a scheduled $30 million deposit for fiscal 2021. New York, meanwhile, closed one-third of its $8.3 billion shortfall by drawing on reserves.

“This approach will be difficult to replicate,” Pew said.

Few of the cities included in Pew’s study developed new sources of one-time or continuing revenue, “in part because many don’t have authority to do so without state or voter approval.”

While Philadelphia imposed a one-year hike in its parking tax and marginally raised its wage tax on commuters, Nashville raised property tax rates by 34%.

Several cities, according to Pew, adjusted fees. Kansas City, Missouri, increased its ambulance charges to better reflect the costs the city typically incurs for the service.