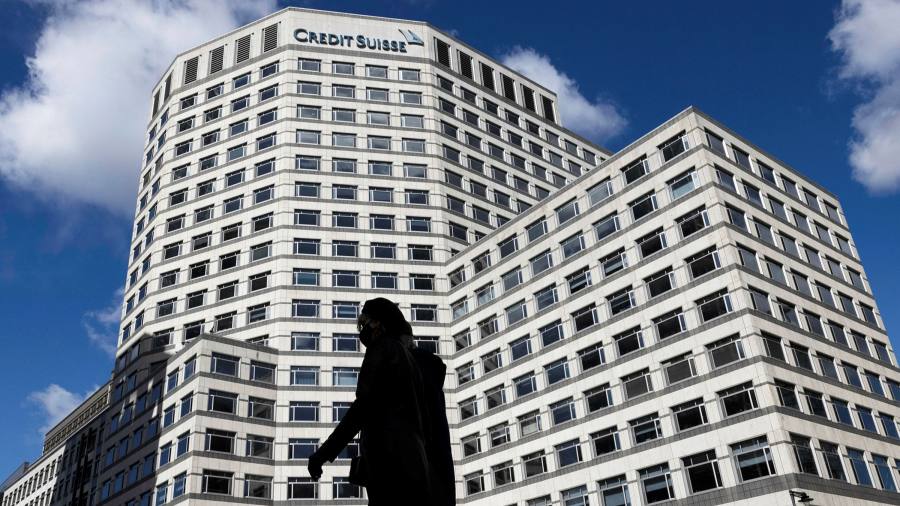 Some of Credit Suisse’s largest shareholders will attempt to remove the board member in charge of risk oversight, in protest at twin scandals that have cost the bank and its clients billions and tarnished its reputation.

Andreas Gottschling — a 53-year-old German who has served as chair of the risk committee since 2018, earning a $1m annual fee — has come under fire after the Swiss bank lost at least $4.7bn from the collapse of family office Archegos.

That came shortly after Credit Suisse had to suspend $10bn of supply-chain finance funds linked to controversial financier Lex Greensill, whose insolvency could cost the lender’s clients as much as $3bn. The bank has been forced to raise $1.9bn to shore up its capital and has cancelled investor payouts.

David Herro, vice-chair of Harris Associates, which says it owns 10.25 per cent of the stock, said: “It’s the director’s job to represent the shareholders and to watch over management . . . Not only should Mr Gottschling be voted down, but I’m actually surprised in light of current events that he hasn’t already resigned.”

Herro added he hoped the arrival of a new chair — former Lloyds Bank chief executive António Horta-Osório — on April 30 would lead to an overhaul of the board with more banking expertise recruited.

Harris will be joined by the Ethos Foundation, which represents 200 Swiss pension funds that own between 3 and 5 per cent of the lender.

“Our clients are really angry about what has happened,” said Vincent Kaufmann, chief executive of Ethos. “Other members of the risk committee have not been there very long so we will give them more of a chance. [Gottschling] took over in 2018 as chair. This now requires a change.”

Norway’s oil fund also said on Sunday it would vote against the re-election of Gottschling, as well as five other board members including lead independent director Severin Schwan. The world’s largest sovereign wealth fund owned 3.43 per cent of the stock at the end of last year, according to its most recent disclosure.

However, its proxy peer ISS did not counsel investors to oppose the board member.

Even with the backing of Norges, it is unclear if Harris and Ethos can gather enough support to unseat Gottschling. Last year, Herro led a public campaign backed by Ethos and hedge funds Silchester International Investors and Eminence Capital to remove chair Urs Rohner and keep ex-chief executive Tidjane Thiam in his role.

He failed. Thiam stepped down, the chair was re-elected and continued until the end of his term. Rohner said at the time that other large shareholders, including BlackRock, had been more supportive of him and that the investor unrest was “not something which worries me a lot”.

Gottschling started his career as a quantitative analyst at Deutsche Bank and has also worked for McKinsey and as chief risk officer of Erste Bank. He is also a director at Deutsche Börse.

As a director, he was involved in multiple conference calls on the risks presented by Greensill last year. They were prompted in part by FT stories revealing that SoftBank was using Credit Suisse’s supply-chain finance funds to route hundreds of millions of dollars to struggling companies it owned.

Ultimately, Gottschling sided with those who thought Greensill was a valuable entrepreneurial client with whom it was worth continuing business, according to people with direct knowledge of the matter.

While the SoftBank circular financing scheme was stopped, the Greensill-linked SCF funds subsequently grew to $10bn. Gottschling was also a supporter of Lara Warner, Credit Suisse’s ex-chief risk and compliance officer who was removed this month.

Another person close to the bank said Gottschling did not participate in calls about Greensill outside normal risk committee discussions and did not personally “back” him.

Greensill and Archegos are not the only risk management failures during his tenure. In 2018, Credit Suisse lost about $60m after it was left holding a block of shares in clothing company Canada Goose when its stock plunged. A year later, the bank lost $200m when New York hedge fund Malachite Capital failed.