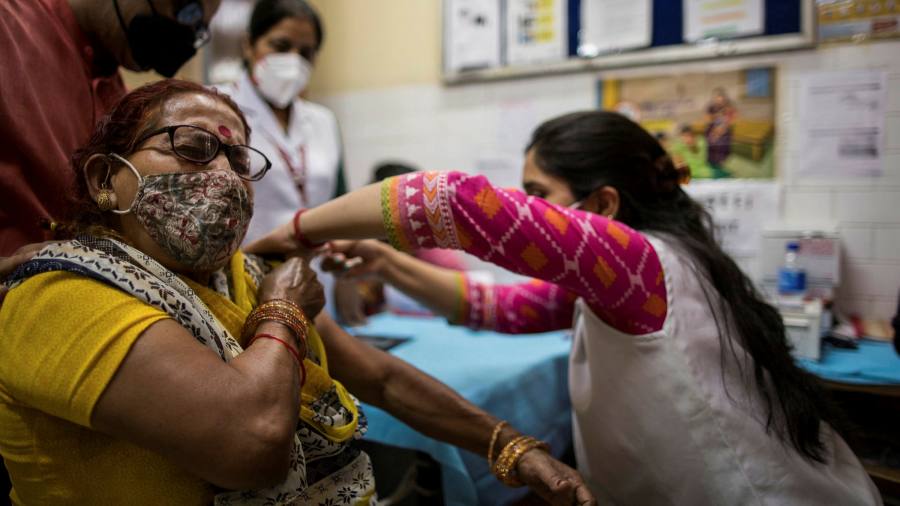 The US will share 60m doses of AstraZeneca’s Covid-19 vaccine with other countries, the White House announced on Monday, as the Biden administration comes under pressure to assist areas struggling to contain a new surge of cases.

The White House said no decision had been made yet about which nations would receive the doses, although demand is likely to be high from India, where the country’s hospitals have become overwhelmed by record numbers of patients amid a catastrophic new wave of infections.

“The administration is looking at options to share American-made AstraZeneca vaccine doses,” Jen Psaki, the White House press secretary, said on Monday. “We do not need to use AstraZeneca in our fight against Covid.” Vaccines from BioNTech/Pfizer, Moderna and Johnson & Johnson are authorised for use in the US.

Earlier Andy Slavitt, a coronavirus adviser to US President Joe Biden, tweeted that 60m doses would be shared “as they become available”.

AstraZeneca has not yet submitted its vaccine for US authorisation as it continues its trials in the country. Psaki did not say the vaccine would have to be approved by the US Food and Drug Administration before being exported, but said the doses would have to pass quality control checks.

The US had previously said it would send several million AstraZeneca doses to Canada and Mexico.

New Delhi reported a world record 349,000 new infections on Saturday, along with more than 2,700 deaths, though experts believe the real numbers are being widely under-reported.

The Biden administration said over the weekend it was sending therapeutics, test kits, ventilators and personal protective equipment to India, as well as exploring other ways to provide oxygen “on an urgent basis”.

Biden told Modi on Monday the US would show its “steadfast support for the people of India who have been impacted by the recent surge in Covid-19 cases”.

European countries have also promised to help. The UK said it would send hundreds of oxygen concentrators and ventilators after a request from India. The EU said it was “co-ordinating” supplies of oxygen and medicine after activating its civil protection mechanism at India’s request.