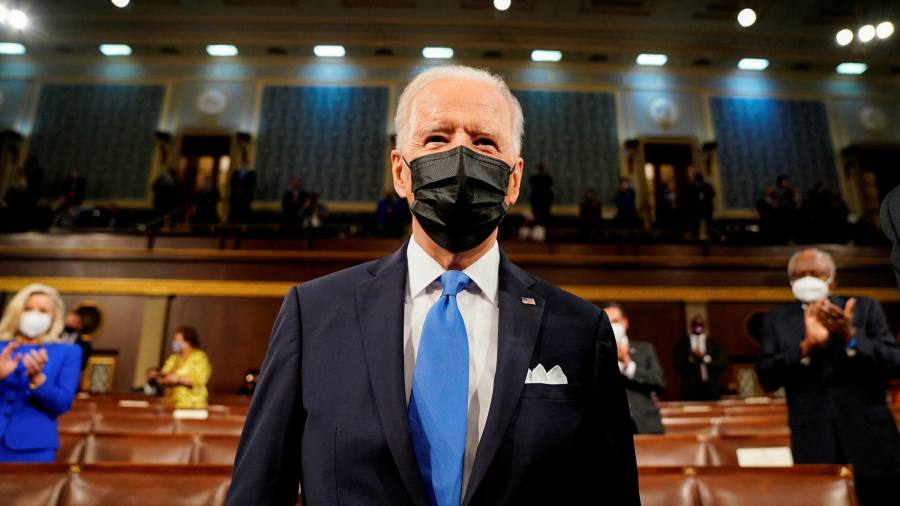 Joe Biden said America was “rising anew” in his first speech to a joint session of Congress on Wednesday night as he declared the country was experiencing a revival following a devastating pandemic and economic crisis.

“After 100 days of rescue and renewal, America is ready for take-off,” Biden said. “We are working again. Dreaming again. Discovering again. Leading the world again. We have shown each other and the world: There is no quit in America,” he said. “One hundred days ago, America’s house was on fire. We had to act.”

Biden started delivering his remarks at the US Capitol a little after 9pm in Washington without the usual packed audience of lawmakers and senior government officials because the number of attendees was limited due to coronavirus precautions.

But the setting was familiar to the 78-year-old, who served as a senator from Delaware for decades and vice-president for eight years under Barack Obama. Before he delivered his address, Biden noted that he was the first president to give the speech flanked by two women — Kamala Harris, vice-president, and Nancy Pelosi, House speaker.

Biden touted the economic recovery in the US and made a pitch for Congress to pass his sprawling spending agenda. “America is moving. Moving forward. And we can’t stop now. We’re in a competition with China and other countries to win the 21st century.”

After passing a $1.9tn stimulus plan in March, Biden has turned his focus to persuading Congress to pass a $2.3tn infrastructure spending bill and a $1.8tn expansion of the social safety net, which he wants to fund with higher taxes on corporations and the wealthy.

The president described his infrastructure plan as a “blue-collar blueprint to build America” and took a swipe at Wall Street, sections of which have launched a lobbying campaign to thwart his tax rises.

Biden’s speech came on the eve of his 100th day in office. He also pointed to the rapid vaccination rollout as evidence that he delivered on his campaign pledge to restore competence and decency to the White House after four years of Donald Trump.

“At a mass vaccination centre in Glendale, Arizona, I asked a nurse what it’s like. She said ‘every shot feels like a dose of hope’.”

The US president’s criticism of Wall Street echoed his presidential campaign, during which he promised to “reward work, not wealth” by prioritising low and middle-income household over richer families.

However, presidents delivering primetime addresses in front of Congress and the nation tend to choose their words carefully. Biden’s focus on the financial services industry and its wealthiest customers underlined his belief that he can win public support for trillions of dollars of investment as long as they are funded by taxes targeted at large companies and the rich.

Where the Bulls Roam: TSLA, ILMN, SQ, NVTA, TTD
How many stocks should I buy?
This Week’s Hidden Gems: (HDSN)(JBT)
Common investing mistakes – part 1
Here’s Why Chesapeake Energy Shares Were Halted on Tuesday