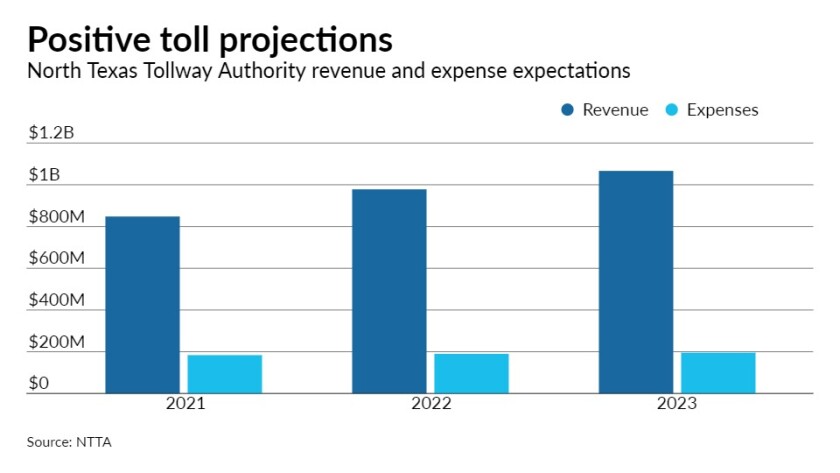 The North Texas Tollway Authority plans to keep its winning streak alive with $850 million of refunding amid rebounding toll revenues.

The authority, which operates hundreds of miles of toll roads in the Dallas-Fort Worth area, reports saving more than $1 billion through refunding $7 billion of debt since 2013.

The first-tier bonds are rated A1 by Moody’s Investors Service and A-plus by S&P Global Ratings.

Second-tier bonds are rated a notch lower at A2 by Moody’s and A by S&P. Outlooks on both series are stable after S&P revised its outlook from negative ahead of this deal.

The bonds are pricing through negotiation Wednesday, with closing May 25.

RBC Capital Markets, led by managing director Karl Hummel, is book-runner on the taxable Series A, while JPMorgan, led by executive director Marshall Kitain, is managing the Series B.
Richard Ramirez, managing director at Hilltop Securities, is financial advisor on the deal.

The first-tier bonds will refund bonds issued in 2008 and 2014 for interest savings.

The second-tier bond proceeds will refund the Texas Department of Transportation loan for the 360 Tollway and transfer that asset to the NTTA system. The issue will also take out $200 million of commercial paper.

The 360 Tollway is a 9.7-mile toll road between Tarrant and Ellis counties. Built as a public/public partnership between TxDoT and NTTA, it opened to traffic on May 11, 2018.

“Like our 2017 transaction that brought non-system assets into the system, this refunding will also bring 360T into the system,” Porter said. “Otherwise, this is very similar to our prior refundings where the goal was to achieve debt service savings.”

“We believe the stable outlooks are an accurate reflection of our forward looking environment,” Porter said. “These outlooks along with our past performance — pandemic withstanding — make NTTA bonds an attractive investment.”

In revising its outlook, S&P pointed to a rapid rebound in toll revenues to near the 2019 levels after a year of the COVID-19 crisis.

“The outlook revision reflects our view of the improvement in NTTA’s monthly toll transactions to near 100% of its 2019 levels following a material drop in traffic during 2020,” said S&P Global Ratings credit analyst Kevin Archer. “The recovery in traffic will allow the system to achieve future financial metrics consistent with historical results.”

Even after a 25% drop in revenues during the COVID-19 pandemic last year, NTTA maintained debt-service coverage ratios above the levels required by bond covenants. The authority reduced spending and delayed some projects.

Iron Condors: 101 What is it and How Does it Make You Money?
First Solar (FSLR) and Saia (SAIA) Are Aggressive Growth Stocks
Here’s Why Chesapeake Energy Shares Were Halted on Tuesday
This Week’s Hidden Gems: (BABY)(COHR)
Where the Bulls Roam: TSLA, ILMN, SQ, NVTA, TTD