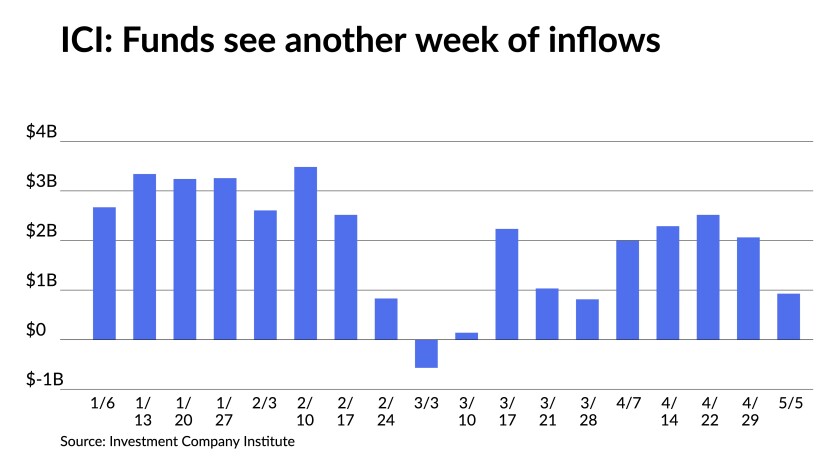 Municipal yields rose Wednesday on the back of a rising U.S. Treasury market, a sell-off in equities amid inflation concerns and push back from investors in the primary that led to higher yields on new-issues.

Triple-A benchmark yields rose two to four basis points across the curve while municipal to UST ratios closed at 60% in 10 years and 66% in 30 years on Wednesday, according to Refinitiv MMD, while ICE Data Services had the 10-year at 60% and the 30 at 67%, with both showing slight outperformance to the UST sell-off.

Gilt-edged Fairfax County, Virginia’s $216 million deal saw its yields rise five to 11 basis points in a repricing while it changed coupon structures to a higher premium 4% from 2% in a second tranche and lowered yields there. The Dormitory Authority of the State of New York saw most of its yields stay the same from a Tuesday retail offering, but did bump levels on 10- and 15-year bonds by five and seven basis points. J.P. Morgan Securities won $171.7 million of New Mexico (Aa2/AA//) general obligation bonds with yields tight to triple-A benchmarks.

While the pressure was on municipal rates, the Investment Company Institute reported another week of inflows, with $928 million coming into municipal bond mutual funds and another $285 million into exchange-traded funds for the week ending May 5. This follows $2.070 billion and $789 million, respectively, the prior week.

Refinitiv Lipper’s figures to be released on Thursday will be more telling of how willing investors are to put cash to work in the funds or whether the final week of tax bills will be paid in lieu of reinvesting. The sell-off in equities Wednesday following two days already in the red do not make a strong case for muni investors leaving the asset class for stocks just yet.

In the primary, Raymond James & Associates Inc. priced for institutions $335.9 million of school district revenue bond financing program refunding bonds Series 2021A, B & C for the Dormitory Authority of the State of New York, all tranches callable in 10/1/2029.

A constructive view
Although valuations appear rich, economic and political themes look positive for municipals, according to the municipal team at BlackRock.

Their view is based on municipals posting another strong monthly return in April amid falling rates and favorable market dynamics, as well as the fact that seasonal weakness typical of mid-April was averted due to the delayed tax-filing deadline.

“While muni bond valuations look unattractive from a historical perspective, we maintain a constructive view of the asset class over the long term,” Peter Hayes, head of the municipal bonds group; James Schwartz, head of municipal credit research; and Sean Carney, head of municipal strategy said in a report on Wednesday.

“We believe municipal fundamentals will continue to benefit from a combination of economic reopening, substantial fiscal aid, and a focus on infrastructure,” the analysts wrote.

Hayes, Schwartz, and Carney, said although infrastructure details are yet to be finalized, it “seems possible” that higher tax rates will drive increased demand for muni bonds.

“Valuations continued to richen with muni-to-Treasury ratios in the intermediate- and long-end of the curve pushing closer to the all-time lows set in February,” according to Hayes, Schwartz, and Carney.

Longer duration and lower quality bonds were the stronger performers in April, they noted, compared to tobacco bonds, which struggled on news of the U.S. Food and Drug Administration (FDA) considering a ban on menthol and a lower nicotine level in cigarettes.

Week-to-week volatility in the new-issue calendar avoided consecutive weeks of significantly above-average supply, putting less stress on the market, as new issues were oversubscribed by seven times on average in April, they added.

BlackRock maintains a neutral stance on duration within a barbell yield curve strategy, focusing on zero to five years on the short end and 20-plus years on the long end.

“We continue to hold a preference for lower-rated credits, revenue bonds and sectors that have been more impacted by the pandemic such as transportation, travel-related [hotel tax, and airport] and health care,” they wrote.

The team is overweight in higher quality state and essential-service bonds, school districts and local governments supported by property taxes, issuers that should benefit from the re-opening of the economy, and select issuers in the high yield space. At the same time, they are underweight in speculative projects with weak sponsorship, unproven technology or unsound feasibility studies, as well as senior living and long-term care facilities, they noted.

Inflation heats up
Current price pressures are “very much transitory,” Federal Reserve Board Vice Chair Richard Clarida said Wednesday after the consumer price index and the core rate came in much higher than expected.

The consumer price index rose 0.8% in April after a 0.6% gain in March, while the core rate climbed 0.9% after an 0.3% increase the prior month. The jump in core CPI was the biggest monthly gain since April 1982.

Economists polled by IFR Markets expected the headline number to increase 0.2% and the core to climb 0.3%.

“While this is a startling rise on a nominal level, the recent backup in consumer prices primarily reflects reflation, a scenario that Fed officials have gone to great lengths to inform or warn the market about,” said Stifel Chief Economist Lindsey Piegza.

Indeed, Clarida said, “We have been saying that reopening will put pressure on prices, but I was surprised at how high it came in. We have pent-up demand and it will take time for supply to catch up to demand.”

History suggests “bottlenecks are likely to be transitory and we will be able to bring the supply and demand imbalance to more of an equilibrium down the road.”

Despite the higher inflation numbers, he said, it is “not yet time” for Fed action, but if inflation or expectations rose significantly the Fed is prepared to act.

But not all analysts agreed.

“The inflation we all know and feel every day is finally beginning to show up in the data,” said Bryce Doty, senior vice president and senior portfolio manager at Sit Fixed Income Advisors, LLC. The Fed’s “response to this will likely continue to be to not worry as it is all temporary. But what else can they say?”

But rate hikes, he said, won’t ease “the rising costs of commodities and supply chain shortages driving inflation,” which will continue climbing with vaccination rates across the globe. “So, today’s spike in inflation may just be the tip of the iceberg.”

And while the headline number “certainly screams inflation,” Jack Janasiewicz, portfolio strategist at Natixis Investment Managers, said, “if we take a step back and dig a little deeper, we see a theme evolving: bottleneck issues and pent-up demand. Both of these appear to be at play in the data.”

“Many of the driving factors here are pent up demand/reopen trade related as well as some supply chain bottlenecking issues,” Janasiewicz noted. “Do Fed hikes fix these issues? No.”

Also, he cautioned, these issues are transitory and one month’s numbers don’t suggest a trend.

“The market is uncomfortable with the Fed’s new framework,” Janasiewicz said and “doesn’t want to buy in.”

So it becomes a game where “they think the Fed will blink much sooner than they claim. We disagree. The Fed has been saying all along what they are going to do. The market doesn’t want to listen.”

Also released on Wednesday, the Treasury deficit narrowed to $225.6 billion in April from $659.6 billion in March.