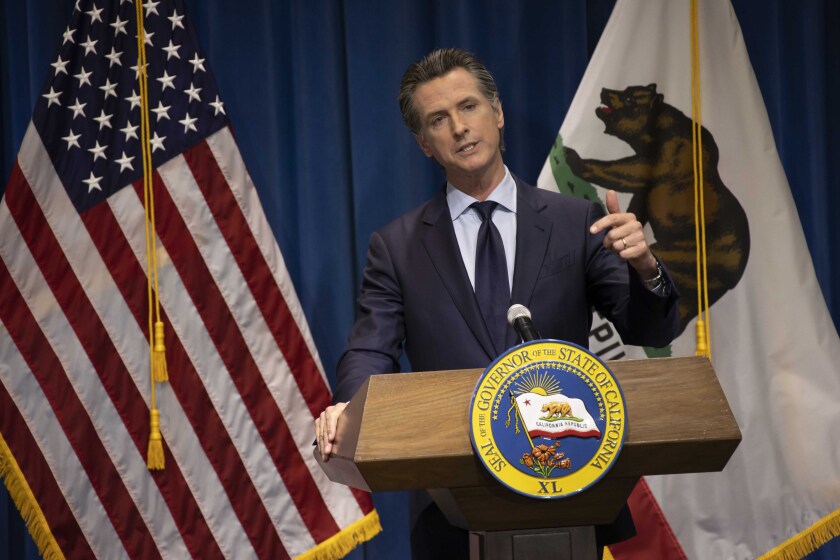 California Gov. Gavin Newsom capped a week of daily multi-billion dollar additions to his proposed $267.8 billion budget Friday with a plan to bring universal broadband to the state and expand Medi-Cal to undocumented immigrants over the age of 60.

The governor began the week by declaring the state will a $75.7 billion surplus and is eligible for $26 billion in federal aid and he would use the money to fund a $100 billion California Comeback Plan.

Newsom’s proposals this week have included $11.9 billion to provide $600 stimulus checks to residents who make under $75,000, $12 billion to fight homelessness, $20 billion to reimagine education and $5.1 billion for water infrastructure and drought response.

The governor’s May budget revisions typically start frenzied weeks of negotiations between Newsom and state lawmakers leading up to the June 15 budget approval deadline.

A likely sticking point will be the Medi-Cal expansion, which Assembly Democrats would like expanded to all undocumented immigrants. The governor proposed spending $2 billion this year to expand the state’s version of Medicaid to undocumented seniors.

Most of the $7 billion to expand broadband would come from federal relief funds. Newsom’s May revision to his budget proposal also breaks out how the governor would spend the rest of the $26 billion coming from the federal government.

“It is time to do this justice, not just for our kids’ education, but as an economic development strategy for rural regions,” Newsom said. “Let’s get this done once and for all, so no future generations are talking about the digital divide.”

He didn’t provide details at this point as to how that program would be structured.

“Those dollars are coming back into the state, reinforcing we have a real federal partner for a high-speed rail system,” Newsom said.

His Republican opponents in the recall election expected later this year have been running on the idea that the fact the state has such a large surplus indicates that Californians are overtaxed.

Newsom responded that the surplus is not an indication that the state is overtaxed, but proof of the strength of the state’s economy.

“There were 41 initial public offerings in the state today,” Newsom said. “If you read Fortune Magazine, of the 64 most influential companies in the country, 31 are in California.”

The last time that California increased taxes was in 2012, and it occurred through a proposition approved by voters, he said.

“Kiplinger did an analysis of taxes in this country, not just through the lens of 1% earners,” Newsom said. “California came out in that survey as a tax friendly state, right there around Texas. If you look at the property taxes in this state, they are much lower than the states they identify as being tax friendly.”

For only the second time since the Gann Act was adopted in 1979, the state will hit a cap that requires it to return $8 billion to schools and $8 billion to taxpayers. The governor said his $11.9 billion rebate isn’t motivated by the Gann Act, but in addition to that number.

The state’s nonpartisan Legislative Analyst also cautioned in a report last week that lawmakers be mindful of matching one-time money with one-time expenditures, but the budget represents some expansions, including a program to add a “K2” grade to public schools for four-year-olds.

“The percentage of one-time spending vs ongoing is similar to previous years,” said Department of Finance Director Keely Bosler. “We have planned for a lot of risk in the future forecast. We have seen capital gains plummet with the stock market during the last two recessions.”

State revenues with a heavy dependence on income taxes and capital gains can fluctuate wildly with changes in the stock market.

Bosler added that her team is mindful of balancing budget growth against the risks they consider to expenditures and revenues in the state’s multi-year forecast.

“We are also mindful of just how incredibly uncertain things continue to be,” Bosler said. “There was $3 trillion pumped into the economy by the federal government since our December forecast and it has had an impact.”

But only 43% of the jobs lost during the height of the pandemic have been added back, said Bosler, which is why one of the things informing the budget is how to provide relief to those households hit the hardest.

Social Media Stocks: What to Expect in Earnings for FB, TWTR, LNKD
Where the Bulls Roam: TSLA, ILMN, SQ, NVTA, TTD
How You Can Make Money with Options and Still Stay SAFE
Here’s Why Chesapeake Energy Shares Were Halted on Tuesday
Should You Hide Out in Wal-Mart’s Stock?