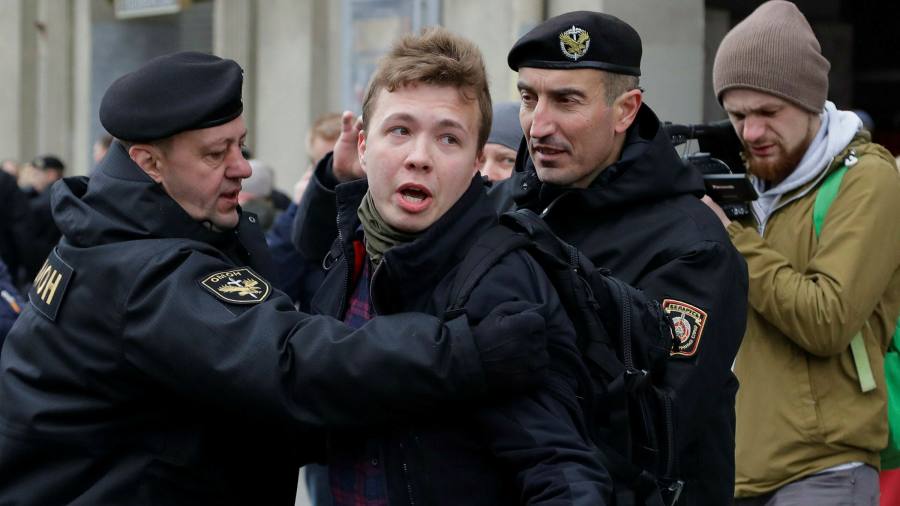 European leaders have called for an immediate international response after Belarus forced a Ryanair flight bound for Lithuania to land in Minsk on Sunday and arrested one of its passengers, a top opposition activist.

“From now — no one flying over Belarus — can be secure,” she wrote on Twitter, after Ryanair flight FR4978 from Athens to Vilnius was unexpectedly diverted to Minsk.

European Commission president Ursula von der Leyen wrote on Twitter that the forced landing was “utterly unacceptable” and called on Belarus to let all passengers travel safely to Vilnius. “Any violation of international air transport rules must bear consequences,” she wrote.

Lithuania’s president Gitanas Nauseda called for Protasevich’s swift release and said he would raise the matter at an EU summit on Monday. “I call on Nato and EU allies to immediately react to the threat posed to international civil aviation by the Belarus regime,” Nauseda said in a statement on his website.

Polish prime minister Mateusz Morawiecki wrote on Twitter that he would call for “immediate sanctions” against Belarus. “Hijacking of a civilian plane is an unprecedented act of state terrorism. It cannot go unpunished,” Morawiecki wrote.

Protasevich, 26, is the former editor of Nexta, the Warsaw-based media group that played a prominent role in both covering and directing huge protests against Lukashenko last year.

Belarusian president Alexander personally gave an “irrevocable command to turn the plane around and land it” before it left Belarusian airspace, according to a post on a semi-official presidential channel on messaging app Telegram.

Belarusian security forces did not immediately confirm whether Protasevich had been arrested.

In November, Belarus placed Protasevich on a terrorist watchlist and charged him with three protest-related crimes, the most serious of which carries a sentence of up to 15 years in prison.

The Lithuanian foreign ministry said in a statement that Protasevich had been “detained by the Minsk regime”.

Ryanair said the flight crew “were notified by Belarus [air traffic control] of a potential security threat on board and were instructed to divert to the nearest airport, Minsk”.

“Nothing untoward was found and authorities cleared the aircraft to depart together with passengers and crew after approximately five hours on the ground in Minsk,” it said in a statement. The company has “notified the relevant national and European safety and security agencies”.

According to messages sent by Protasevich to his colleagues, he noticed he was being followed by a man he suspected was a Belarusian KGB agent while at the Athens departure lounge. The man stood behind him in the boarding queue and tried to take a photo of his documents, the activist wrote in text messages to his colleagues. Protasevich said the man then asked him a “stupid question” in Russian and left. The plane turned round near the Lithuanian border and landed in Minsk, according to flight tracking data.

Andrei Gurtsevich, a senior air force commander, said Belarus had decided to scramble a MiG-29 fighter jet to accompany the plane after learning of a bomb threat”, according to Belta, the state news agency. Airport officials later said the bomb threat was “false”.

Nexta has provoked Lukashenko’s ire for its coverage of last year’s protests and the brutal crackdown that Lukashenko’s regime unleashed in response. Its channel on Telegram has more than 1.2m subscribers, a huge audience in a country of just 9.5m people.

Hundreds of thousands of Belarusians took to the streets in an unprecedented show of discontent after the former collective farm boss, who has ruled Belarus with an iron fist for 27 years, claimed victory over Tsikhanouskaya in a deeply flawed presidential election last year.

Most of the opposition’s main figures are either in exile, such as Tsikhanouskaya, who is based in Lithuania, or in prison.