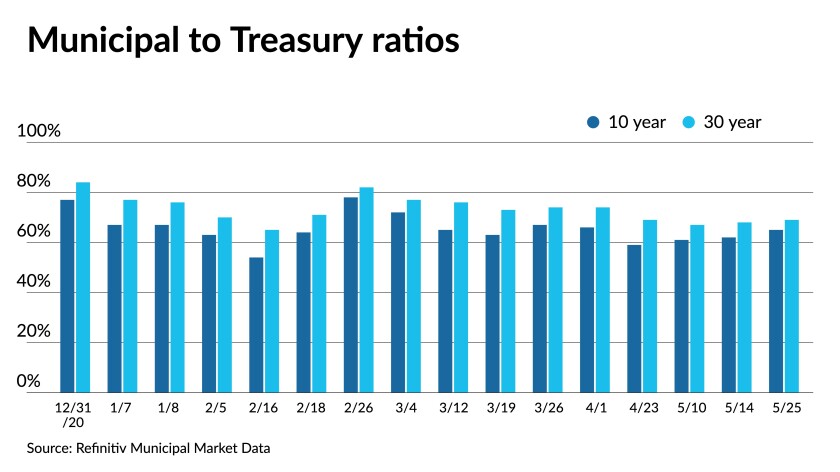 A larger number of deals coming to market across all credit sectors has offered up a fair amount of distraction for inventory distribution, said Kim Olsan, senior vice president at FHN Financial.

“The result is that secondary selling has trailed off to a daily figure of less than $500 million par value, likely a function of hefty cash inflows into mutual funds and allocations into the asset class from other constituents providing funds for syndicate settlements,” Olsan said. Friday’s bids-wanteds list totaled $388.9 million, slightly up from Thursday’s $277.6 million.

Dealer holdings have risen in May.

“May’s daily trade count is 7% lower than the first four months of the year while dealer position carry has increased from $8.8 billion at the end of April to $10.9 billion as of May 12,” she noted. “The mismatch in focus between the primary and secondary markets is offering inquiry a chance to find modest concession in older line items.”

Lower dealer inventories have translated into pressure on municipal rates, as was seen in February during 2021’s first sell-off. At that time, selling pressure was not being seen but dealer carry actually fell and exacerbated liquidity constraints.

In the current market climate, demand and the lack of supply is keeping things steady, with liquidity at the moment not a big concern.

Inflation redux
Tuesday’s economic data was “mostly disappointing” according to one analyst, and Wall Street may be ready to see inflation as transitory.

“Inflationistas look like they might be ready to throw in the towel, as we are supposed to be seeing accelerating growth and mounting price pressures, but right now the surge across commodity prices has eased, the housing market hit a top, and consumers’ short-term optimism retreated,” according to Ed Moya, senior market analyst for the Americas at OANDA. “The inflation debate is not over, but the majority of Wall Street believes it will be transitory.”

The latest reads, which show higher inflation, do “not appear to be the precursor of a persistent movement to undesirably high levels of inflation,” Federal Reserve Bank of Chicago President Charles Evans said Tuesday morning in a virtual event hosted by the Bank of Japan. “I have not seen anything yet to persuade me to change my full support of our accommodative stance for monetary policy or our forward guidance about the path for policy.”

And Fed Vice Chair Richard Clarida said “in upcoming meetings” the Federal Open Market Committee may be able to begin discussing tapering asset purchases. But, he hedged in the Yahoo! Finance interview, saying, “It’s going to depend on the flow of data that we get.”

The consumer confidence index slipped to 117.2 in May from a downwardly revised 117.5 in April, originally reported as 121.7, the Conference Board reported.

With “millions of job openings,” Moya said, “no one was surprised that the present situation improved.” But the “massive drop” in expectations Index showed a massive drop, which could show some data have peaked. “If growth is already starting to slow down, this will support the argument that inflation will be transitory.”

As the COVID pandemic and restrictions ease, “what’s got consumers still feeling so down?” asked Wells Fargo Senior Economist Tim Quinlan and Economic Analyst Sara Cotsakis. “A case can be made that while consumer see a light at the end of the tunnel, some are still wondering if that light is an oncoming train. A pandemic mindset, we are learning, is a hard thing to shake.”

While confidence slipped as did expectations, based on inflation concerns that “could rattle confidence for a while,” they said, although the Wells Fargo economists see “robust” spending in the months ahead.

Separately, new homes sales fell 5.9% to a seasonally adjusted annual pace of 863,000 in April, from a downwardly revised rate of 917,00 in March, originally reported as 1.021 million.

“We doubt the lower April sales figure marks a major deceleration for new home sales,” said Mark Vitner, senior economist at Wells Fargo Securities, “though the latest round of price increases may be giving some would-be buyers pause.”

“Record-low mortgage rates are not enough to overcome the supply shortfall and erosion in affordability,” said Yelena Maleyev, economist at Grant Thornton. “Look for home sales to remain constrained, competition among buyers intense and the upward pressure on inflation to compound as we move into the summer.”

Moya said, “The housing market is poised to cool down as inventories are tight, home builders are dealing with surging prices of lumber and concrete, and lastly while many Americans embrace the return of pre-pandemic life in the big cities.”

Another read of home prices, the S&P CoreLogic Case-Shiller index showed a 13.2% rise in March from a year ago, after a 12.0% jump in the 12 months ending in February.

In the month, prices rose 2.0% across the nation.

Economists anticipated annual growth of 12.3% and a monthly gain of 1.3%.

The 13.2% gain was the highest since December 2005, according to the release.

Also, non-manufacturing activity in the Philadelphia region suggested continued expansion, as business activity at the firm level increased to 36.9 in May from 36.3 in April, while at the firm level, activity climbed to 22.1 from 21.5.

Also released Tuesday, manufacturing activity strengthened in the Richmond Federal Reserve district in May, with the manufacturing index increasing to 18 from 17 the prior month.

Activity in the Richmond district’s service sector improved in May, as the revenues index increased to 29 in May from 22 in April.

The demand index reached an all-time high of 43, besting the previous high of 32 last month.

The survey noted the “Growth of prices paid outpaced that of prices received, but participants expected that gap to narrow in the near future.”

The University of Nebraska Facilities Corp. (Aa1/AA//) is set to price on Wednesday $344.79 million of university facilities program bonds, $260.6 million of series 2021A, and $84.2 million of green Series 2021B. BofA Securities is lead underwriter.

Stock Trading Mistake: When You Are Right, But Still Lose
Common investing mistakes – part 1
First Solar (FSLR) and Saia (SAIA) Are Aggressive Growth Stocks
Iron Condors: 101 What is it and How Does it Make You Money?
My Stock Dropped Over -20% – What Should I Do?