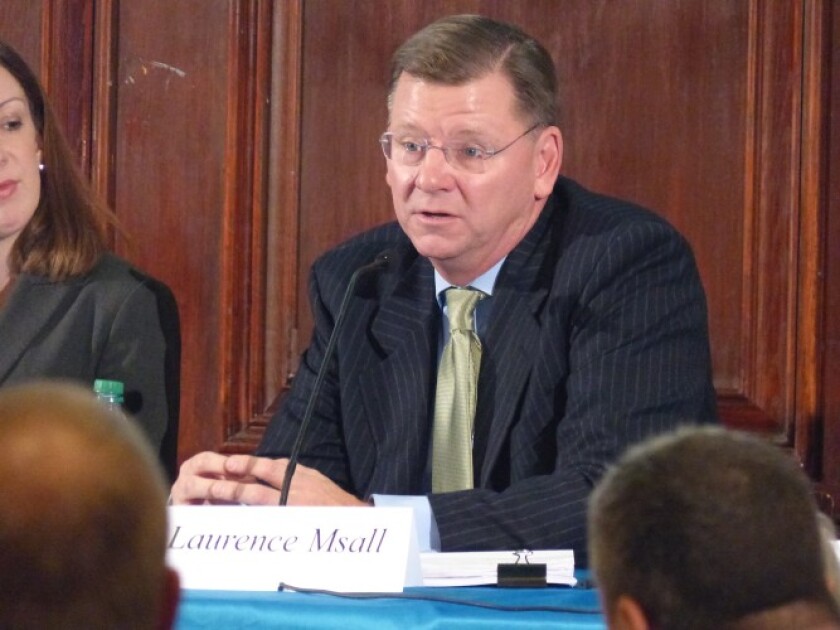 Among the key questions: will the city government continue to transfer money to a school district it no longer controls?

CPS governance is in the crosshairs as lawmakers head into their final stretch with a May 31 deadline to adjourn. The school board is currently appointed by Chicago’s mayor.

“We have not answered some of the most dangerous financial questions that face this this legislature regarding this legislation,” Msall said during a Senate Executive Committee hearing advancing House Bill 2908 to the floor. “There is no guarantee if you pull the responsibility for CPS from the mayor and city of Chicago that they will continue to provide the large amount of financial assistance that they currently provide.”

Mayor Lori Lightfoot opposes the bill that would put an elected school board in place in 2023. The 11-6 vote to advance the bill came after a pledge that negotiations will continue on a compromise — likely beginning with a hybrid of mayoral appointees and elected members before eventually shifting to a fully elected board.

Chicago is the only Illinois municipality that helps cover non-teacher, school employee pension contributions because they participate in the city’s municipal employees’ fund. Chicago is also the only one that provides a dedicated property tax levy for debt service for a separate unit of government, the federation said.

The city provides fiscal help for the district through several avenues laid out in either state statute or intergovernmental agreement. They included $124 million in fiscal 2021 pension contributions.

The junk-rated school district this year received $142.3 million from a dedicated property tax levy used to pay for some debt service funding, $39.7 million for to fund certain CPS capital projects, $12.5 million in grants for programs such as early childhood development and $96.9 million in city-declared tax increment financing surplus revenues, according to data compiled by the federation, an independent organization that researches government finance issues.

City officials have said the pension contributions for CPS will weigh more heavily on Chicago in the coming years rising, to more than $400 million in 2024 after a scheduled ramp up to an actuarial funding basis. CPS employees account for about 60% of fund membership.

“You must remember that the city of Chicago is in dangerous financial condition as are the Chicago Public Schools” and that raises questions over what potentially unwinding “that financial connection” means for the city and CPS, Msall told lawmakers. “We are very concerned about what the future of CPS will be if we don’t keep it accountable and tied to the city of Chicago.”

Three of four rating agencies rate CPS general obligation bonds at a junk level although the ratings have been on the rise over the last few years due to increased state aid and new city tax levies. Rating agencies and the buy side consider Chicago’s $32 billion of net pension liabilities to be the city’s most onerous burden.

Proponents argue the governance change is long overdue, was supported by Lightfoot during her 2018 campaign, and point to the fact that residents of all other Illinois school districts elect their school boards.

Opponents of the current proposal worry about the proposed board’s size and the involvement of special interest funding of election campaigns, the Chicago Teachers Union seen as likely to wield outsized influence over an elected board. They also note that mayors of most large cities control their schools.

Some also fear a fully elected school board — without financial rules incorporated into the legislation — would open the door to costly spending. The board could offer raises or seek pension changes without any input and taxpayers would be stuck with the bill.

Lightfoot notied that the city’s support for non-teacher CPS employee contributions was part of the state deal that handed full control of CPS over to then Mayor Richard M. Daley in 1995.

“To have that obligation continue yet have the mayor and city council” without any “influence over CPS?” Lightfoot said when asked at a post-City Council news conference Wednesday about a possible, temporary hybrid board.

“The devil is in the details. We haven’t been at the table and I haven’t seen any bill language so I can’t speculate,” Lightfoot said when asked about a possible, temporary hybrid board. “I’m very concerned that taxpayers might be on the hook for a school system that…neither I nor the city council has any influence over.”

The bill’s sponsor, Sen. Robert Martwick, D-Chicago, and the sponsor of a Lightfoot-backed counterproposal, Sen. Kimberly Lightford, D-Maywood, tussled during the committee meeting when Martwick said he remains committed to a compromise but is intent on pushing for a vote even in the absence of an agreement.

Lightfoot’s plan would give her control of five of seven members with two being elected in 2026. The board would grow to 11 in 2028 with three elected and eight appointed members.

“I am confident that we will pass a compromise elected school board bill this General Assembly and I am equally confident Sen. Martwick won’t be in position of calling this bill” without a compromise amendment, Senate President Don Harmon, D-Oak Park, told the committee in urging approval as a procedural matter in order to have a bill ready for a floor vote once a compromise is reached.

In addition to the fiscal concerns, the Civic Federation’s opposition to a 21-member board is further driven by board’s size, which would make consensus difficult, and could lead to expensive and divisive political campaigns funded by interest groups without no guarantee of improved academic outcomes, the federation wrote in a report last week.

CPS operates on a $6.9 billion budget this year and has about $8 billion of debt.