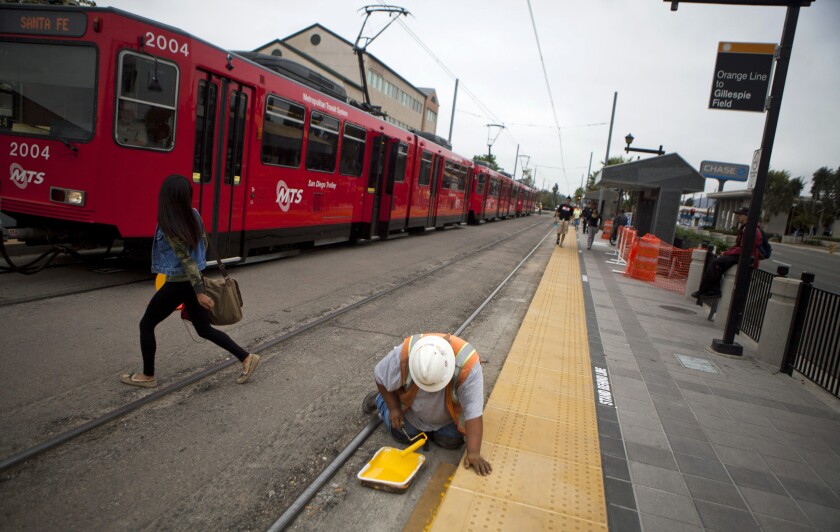 The 30-year plan drafted by the 21-member board of the San Diego Association of Governments has the support of environmental and labor groups though it faces opposition from some Republicans and anti-tax groups.

“This is a transformational plan — focused on the things that are really important,” said SANDAG Chair and Encinitas Mayor Catherine Blakespear at a press conference Thursday. “We have three main themes that we’re working around, and that is faster, fairer, and cleaner.”

The proposal, $30 billion more expensive than the 2015 update, could involve a citizen’s ballot initiative to fund new transit projects.

The plan will largely depend on local funding, according to the document. That’s because of the declining power of the federal gas tax due to inflation and more fuel-efficient vehicles, and because the majority of the state’s $54 billion, 10-year transportation bill, Senate Bill 1, approved in 2017, targets a backlog of existing operations and maintenance projects.

It creates transportation corridors and seeks to steer the development of affordable housing into those corridors.

Planners said it creates tens of thousands of new connections and involves hundreds of new projects including a high-speed rail line that will hug the coast and run through two of San Diego’s more affluent communities, Solana Beach and Encinitas.

It involves 200 miles of rail carrying electric trains, and a dozen new stations including hubs near the downtown airport and at the Tijuana border.

“This Regional Plan, excitingly, can be a blueprint for thousands of good-paying local jobs that will allow folks to live in San Diego and provide for themselves and for their families,” said San Diego Mayor Todd Gloria, who is SANDAG’s vice chair.

Environmental and social justice groups came out in force to testify in support of the plan when SANDAG discussed the plan at its Friday board meeting. A focus of the plan is insuring that lower-income communities receive high quality projects.

“Thanks for being responsive to our needs,” Pollard said.

“To reduce carbon, San Diego must move people out of their carbon-intensive cars and into mass transit,” Houde said. “We are enthusiastic and support SANDAG’s plan.”

The planning agency will now hear public comment through July 30 and hopes to adopt the plan and approve an environmental review by the end of the year.