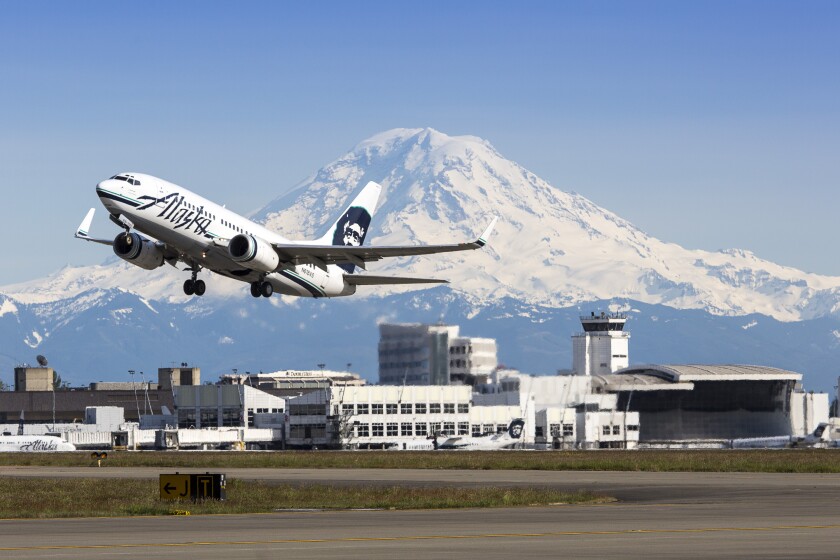 The accelerated return of passenger demand combined with federal aid earned the Port of Seattle an outlook boost from Fitch Ratings ahead of plans to price $810 million of revenue bonds next week.

The agency oversees the Seattle-Tacoma International Airport and is a 50% owner of the Northwest Seaport Alliance, a marine cargo operating partnership of the Port of Tacoma and the Port of Seattle.

“There has been a lot of federal support for airlines and airports that has helped stabilize airlines,” said Moses Kopmar, a Moody’s analyst. Moody’s revised its outlook on the U.S. airport sector to positive in May. “The airlines are in a position to add services, and on the demand side consumers are ready and able to travel.”

As lead manager of a six-bank syndicate, Barclays will price $289 million in revenue refunding bonds and $586 million in new money revenue bonds on June 17. The finance team hasn’t decided yet if there will be an early retail pricing ahead of institutional sales.

The port expects the bonds will be well received by investors and hopes to achieve $50 million in net present value savings on the refunding, said Elizabeth Morrison, the port’s director of corporate finance.

“We do like the rates, but they have been attractive for some time. And, we like the market view of airports right now,” Morrison said. “The rating agencies have placed more airports on stable outlook, and investors are interested in airport credits.”

Airport bond sales over the past few months have been well received, Morrison said.

The proceeds of the new money bonds will be used to fund the airport’s $4.9 billion capital improvement program.

Key projects include a baggage optimization program and some marquee projects nearing completion including an international arrivals facility and the remodeled and renovated north satellite terminal with new gates added, Morrison said.

She called the $4.9 billion, a five-year snapshot of the capital program, because “airports are like old houses, they are constantly in need of fixing and remodeling. We have facilities at the airport that are new and other projects that are ongoing.”

Plans call for $47.3 million of first-lien revenue refunding bonds, tax-exempt and subject to the alternative minimum tax; with the balance in intermediate lien revenue bonds, in four refunding and new money series with a variety of tax statuses.

Fitch Ratings revised its outlook for the port to stable from negative ahead of the deal; it rates the senior lien revenue bonds AA, and the intermediate-lien bonds AA-minus.

“We are very pleased with the ratings,” Morrison said. “We think it reflects a rebound in enplanements.”

The coronavirus pandemic has been the dominant story for the airport since early 2020. In a feasibility report, a consultant developed two scenarios, both of which have the airport back to pre-pandemic levels in a few years, Morrison said.

Though she acknowledged there is a lot of uncertainty in the world right now, she believes the consultant’s target of recovery to pre-pandemic levels by 2025 is reasonable. It’s also on par with the timeline during which Kopmar said Moody’s anticipates a full recovery.

“We are still in an environment where it’s challenging to have a forecast per se,” Morrison said. “We have provided investors with an outlook if we return to pre-pandemic levels in 2025 and follow our past pattern of rapid growth and leveling off, or if we recover by 2025, but have a slower growth trajectory.”

“We want to be cautious in forecasting what the future might bring,” she said.

Fitch said its outlook revision reflects steady passenger recovery trends at the airport, with enplanements now approaching 50% of pre-pandemic levels through April 2021, coupled with strong performance by the Northwest Seaport Alliance and the expectation that cruise operations will resume in July after cruise industry lobbyists secured legislation allowing their foreign-flagged ships to serve Alaska from Seattle without stopping in Canada, which has a pandemic-based halt on cruise operations.

Moody’s also noted that Seattle’s management, unlike some other airports, took immediate action after West Coast economies were hobbled by reduced business activity as governors asked residents to stay home.

The port deferred $40 million of 2020 capital spending to conserve cash and reduced operating expenses in its 2021 budget to $46.4 million lower than the 2020 budget of $469.8 million by freezing or eliminating 167.7 vacant full-time positions; froze pay increases for non-represented employees and achieved equivalent savings for represented staff; and limited travel and training to the minimum necessary to maintain certifications and scaled back contracted services.

The port also applied $147.1 million of CARES Act grants to pay airport expenses, and anticipates another $263.4 million from the federal government, according to an online investor presentation.

Since February 2021, the recovery in enplaned passengers at the airport has tracked or exceeded national trends; the airport’s April 2021 enplanements were 36% lower than in April 2019, outperforming national trends by 5%, according to the presentation.

In April 2020, amid the initial shock of the pandemic the airport’s traffic fell by 94%.

Airport traffic across the industry remains significantly below pre-pandemic levels, according to Fitch in an April 27threport.

With that said, Kopmar said the recovery has been more resilient and consistent then analysts expected. Domestic business travel, however, hasn’t recovered as quickly as leisure travel.

“Our domestic numbers are still down, but international traffic is down more,” Morrison said. “There are restrictions on flying to various destinations. Vaccination distribution has been uneven in other parts of the world.”

Trends that affect airline traffic are more of a factor for the airport than either container or cruise ship traffic, as the airport brings in 80% of the enterprise’s net income even during the pandemic, Morrison said. Volumes in the port’s container business have been mixed, but are rebounding, she said.

Airport operators have been aided by $8 billion in federal aid, while the airlines received $82 billion in support since the beginning of the pandemic, S&P said.

The Seattle-Tacoma airport’s rating was revised to stable in April when S&P reviewed its toll, mass transit and airport ratings, shifting credits from 126 issuers from negative.

The Sea-Tac was the 8thand 10thbusiest airport in the U.S. in 2019 and 2020, as measured by total enplaned domestic and international passengers, according to the online roadshow presentation.

Here’s Why Chesapeake Energy Shares Were Halted on Tuesday
Focus on Consistency NOT on Hitting Home Runs on Your Trades
This Week’s Hidden Gems: (BABY)(COHR)
How You Can Make Money with Options and Still Stay SAFE
Where the Bulls Roam: TSLA, ILMN, SQ, NVTA, TTD