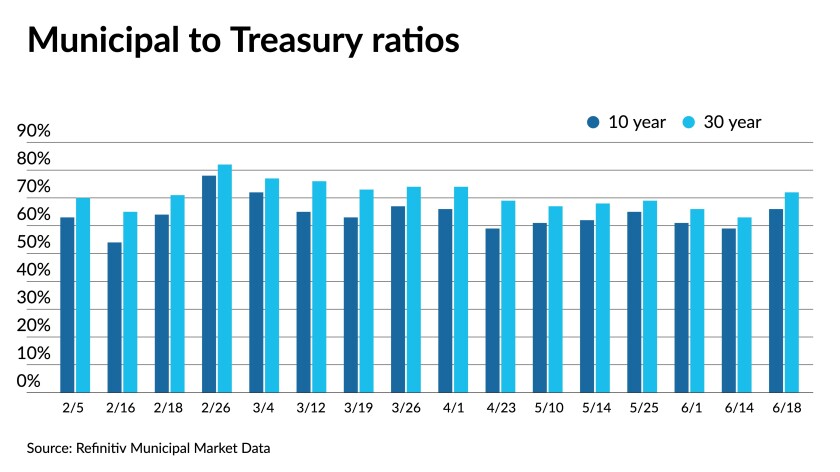 Municipal bond yields rose on the short end Friday as munis again played catch up to the moves in short U.S. Treasuries and investors became more aggressive in bid lists for high-grade paper.

A high-grade bid list out in the front end of the curve inside 10 years saw mixed results, according to Greg Saulnier, managing analyst at Refinitiv MMD. There were few blocks to point to out long as trading was concentrated on bonds inside 15 years.

“I think it’s a combination of low gross yields, still rich municipal to UST ratios, and now the front end of the Treasury curve is under pressure,” particularly after noted dove St. Louis Fed President James Bullard said he sees a rate hike in 2022, “which I think caught a few people off guard,” Saulnier said.

While the correction on Thursday which continued Friday morning caught many off guard, with analysts calling the muni market reaction “strange,” the new yield set should offer better entry points for reinvestment needs heading into July.

“It may also bring a modest widening trend into quarter-end in revenue sectors that have performed so well this year — healthcare and transportation, in particular,” said FHN Senior Vice President Kim Olsan.

While a fast and sharp adjustment isn’t anything new for the market, “it was the largest since the mid-February to mid-March timeframe that ultimately led to a 45 basis-point jump,” Olsan noted.

“The current cycle will help realign relative value ratios between three and seven years back toward their three-month average range of 55%,” Olsan said. “Since the start of the quarter, the curve slope has flattened 30 basis points — pointing to the area where flows have been more protected across multiple buyer segments.”

Municipal to UST ratios have risen this week with the 10-year landing at 66% while the 30-year was at 72%, according to Refinitiv MMD. ICE Data Services had the 10-year muni-to-Treasury ratio at 66% and the 30-year ratio stood at 73%.

The five-year and lower also moved higher Friday as municipal rates rose. Refinitiv MMD had the five-year at 57% and ICE pegged it at 51% and had its one-year at 99%.

Barclays strategists Mikhail Foux, Clare Pickering and Mayur Patel said in light of the aggressive flattening of UST curves, “muni investors have refocused on the shapes of tax-exempt yield curves, which have slowly been flattening pretty aggressively since early May.”

As the flattening trend in Treasuries takes hold, demand for duration will also spill over into the tax-exempt space, with long-dated tax-exempts continuing to outperform, Barclays said.

“However, aside from long-dated munis, we also find value in the 10-year part of the curve that has underperformed in 2021, should do better than the front end — we see the 5s, 10s curves flattening further.”

Olsan noted that after the FOMC meeting Wednesday and the muted response that day, activity turned from a risk-on theme to a greater risk-off theme. Friday’s session continued that theme.

The diverse calendar has large state GOs from Tennessee, competitive deals from Idaho, Georgia Road and Tollway Authority and a large amount of Texas Independent School District PSF guaranteed paper as well as quite a few of triple-A deals, including Yale University bonds.

With just nine sessions left in the month, performance is less favorable in shorter, high-grade tax-exempts and more so in down-in-credit, long structures, Olsan noted. Short-dated bonds are slightly in the red, long bonds have gained about 80 basis points and taxables have earned over 1% this month, she said citing the Bloomberg Barclay’s index figures.

The Boston Water and Sewer Commission (Aa1/AAA//) is set to price on Tuesday $138.8 million of general revenue and refunding bonds, $101.9 million of Series A taxable green bonds and $36.9 million of tax-exempts. BofA Securities is head underwriter.

Supply-chain bottlenecks could linger for the next 12 months, she said, extending the run of “temporary” price pressures related to base effects from the decline when the pandemic-related shutdowns began last year.

And while the pathway of inflation is “still very much in line with where the Fed thought it was going,” Piegza sees it tailing off from its “peak, around early third quarter,” but still exceeding 2% by yearend.

The time it takes to rollout vaccines globally could impact the bottlenecks. “It is easy to forget that we are globally integrated and the rest of the world is still catching up,” she said. “The physical rollout of those is easier said than done, as infrastructure in some of the countries we get are goods from are lacking.”

However, Paul Christopher, head of global market strategy at Wells Fargo Investment Institute, thinks some of the inflation will become permanent. “We don’t think this will be a return to the 1970s-style inflation, but we could see higher wages and higher commodity prices next year, but not enough to derail markets.”

While globalization and technology are disinflationary influences, he said, China, which exports many products to the U.S., “is also seeing increased pricing pressure and we could import some inflation.”

But, overall, Christopher said, “inflation expectations are not signaling that inflation is here to stay.”

Joe Kalish, chief global macro strategist at Ned Davis Research, expects personal consumption expenditures to rise around 3.4% this year 2.1% next year, with risks to the upside. He worries about inflation expectations surpassing 2% while employment slack remains.

Shelter, which accounts for 39% of the consumer price index and 40% of core, could be an issue, he said. “Shelter has been down for so long, now we are seeing it start to make a comeback.”

Monthly rents gained 1.3% in April and then 2.3% in May, the largest increase since 2015, according to Zillow.

“That is something to pay attention to and is worrisome because shelter is not transitory,” Kalish said, “it is sticky.”

Piegza is not as worried about the shelter component of inflation. “Not all renters are equal, from what I am seeing, the higher income, higher rent families are still moving outside of the cities and some of the younger, lower income and lower rents are moving back in.” And there’s also the question of working from home and how long it will last and what the implications will be for rent if people can work remotely from lower-priced areas.

Kalish expects the Fed to announce the start of tapering sometime “between the Jackson Hole Economic Symposium at the end of August and the November 3 FOMC meeting,” with tapering starting in January 2022.