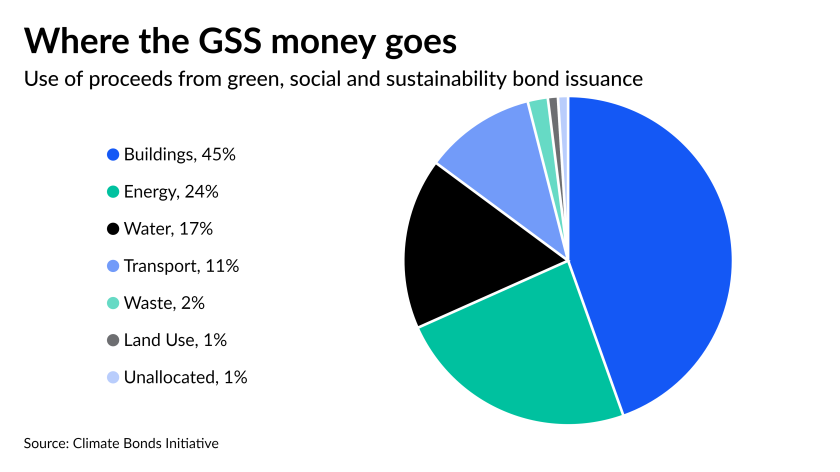 Between 2016 and 2020, green, social and sustainability bond issuance grew by an average of 72% a year in the United States, according to a report issued Tuesday by the Climate Bonds Initiative.

Green municipal bonds issued by local government authorities and state-backed government entities made up 23% of total volume of annual issuance in the U.S.

The U.S. is the second largest source of GSS debt globally behind supranational [EU] issuance. However, the U.S. is the largest country source of GSS bonds, with $275.9 billion issued to date, and $234 billion outstanding at the end of the first quarter of this year.

The largest U.S. green bond issuer is the Federal National Mortgage Association. Fannie Mae entered the green bond market in 2012 and issued 4,200 deals accounting for $94 billion by the end of the first quarter.

There has been a huge change in investor perception of the market, Lisa Bozzelli, director multifamily capital markets at Fannie Mae, said Tuesday at a CBI webinar entitled Sustainable Debt: North America State of the Market 2021.

“It used to be we’d go to meetings and folks would be very interested in hearing about the agency’s CMBs and not as interested about green,” she said. “And it’s had a complete reversal in the past 18 months. Now we’ve got a lot more investor participation and interest in the deals.”

“The U.S. social bond market is still in its infancy and the private sector has dominated issuance to date, but there is huge potential for the state sector to contribute to the growth of this market,” CBI reported. “The Biden administration’s emphasis on addressing social inequalities is expected to result in further development of this market.”

CBI said strengthening reporting standards could ensure greater confidence and transparency in the ESG market. CBI said it found the U.S. was one of only four countries with post-issuance reporting under 80%.

“The U.S. muni bond market sees about a $400 billion a year of issuance — and a very small percentage of that is labeled green or social, probably less than 10%,” Mike Brown, environmental finance manager at the San Francisco Public Utilities Commission, said during the panel discussion.

But, he said, if you think about what is being financed by muni bonds, you can see they back projects that could be green bond eligible.

“So I think there’s a massive opportunity there (for more issuance),” he said. He added, this would depend on issuers, since the market is fragmented with thousands of separate muni issuers with varying degrees of experience, capacity and resources.

“Once we have some coalescence around a standard of reporting it may help,” he said. “Once folks see a pricing benefit that they can count on, I think that will also push folks over the edge to jump into the market.”

He said the authority had already noted definite pricing benefits when issuing its green bonds.

“We are absolutely seeing pricing benefits,” he said.

“We are selling both taxable and tax-exempts — and with both we are seeing a pricing benefit. There’s a larger benefit on the taxable side because it’s a larger investor base and more demand there,” Brown said.

“Due to a continued reliance on fossil fuels to power much of their economies, there is a need for the public as well as private sector to transition to low-carbon energy systems,” CBI said. “Labelled bonds present an opportunity to finance transitions that require companies to drastically change their business models.”

Between 2016 and December 2020, there were 48 qualifying bonds originating from issuers based in the U.S.

“Three quarters of green bonds achieved a greenium and around half of green bonds were allocated to investors describing themselves as green,” CBI said. “In the immediate secondary market, green bonds tended to tighten by a greater magnitude than vanilla equivalents and matched indices after 28 days. This suggests that green bonds offer value to both issuers and investors.”

Looking ahead, CBI argued the U.S. must issue sovereign GSS debt. Many countries have already done so. CBI said a broader range of bond issuers could create a more diverse investment pool, allowing more high-profile investors to participate in the market.

In March, the Government Finance Officers Association released its first-ever best practices on ESG to guide state and local governments on disclosing those concerns to the market.