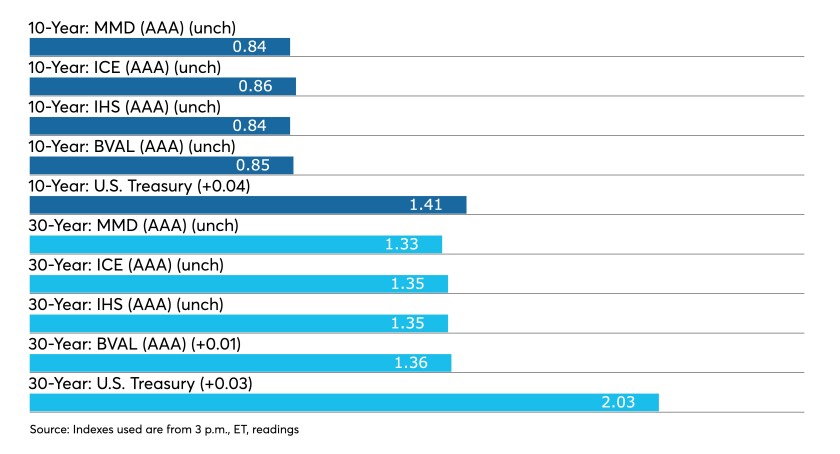 Municipals were little changed Tuesday, ignoring another rise in U.S. Treasuries and a weaker stock market, with the focus on the primary which saw deals bumped in repricings.

Another day of UST weakness after less-than-stellar auctions and municipals stayed in their own lane. Some participants said without the UST rise in yields, municipal benchmarks likely would have kept up with their strength.

Goldman Sachs & Co. LLC priced for the Rector and Visitors of the University of Virginia (Aaa/AAA/AAA/) $100 million of general revenue pledge bonds. Bonds in 2051 priced at par at 2.20%.

The uptick in supply ($11.75 billion 30-day visible per Bond Buyer data) is leading BlackRock to anticipate a return to more traditional seasonal trends in the months ahead, with the firm expecting the market will benefit from a favorable supply-demand imbalance into the fall.

“We foresee continued improvement in credit fundamentals due to a combination of fiscal stimulus and the re-opening of the economy, which could lead to rating upgrades,” according to BlackRock. “Additionally, we think infrastructure negotiations will keep the asset class in focus, and the market will likely play a pivotal role in financing new projects.”

“We continue to hold a preference for lower-rated credits and sectors that have been more impacted by the pandemic, such as transportation, education, travel-related (hotel tax, airport, etc.), and healthcare,” they wrote.

Muni CUSIP requests rise again
Monthly municipal volume increased for a fifth straight month in June. For muni bonds specifically, there was a 3.1% increase in request volumes month-over-month and a 13.4% increase on a year-over-year basis with the aggregate total of all municipal securities — including municipal bonds, long-term and short-term notes, and commercial paper — rising 14.3% in June versus May totals.

On an annualized basis, municipal CUSIP identifier request volumes were up 7.2% through June.

“The recent slowdown in corporate activity has been notable, however, and will be important to watch over the course of the coming months.”

Secondary trading and scales
Trading was light but showed some slightly firmer prints, or at least at levels from Monday and Friday.

Inflation looking less transitory
Congress will undoubtedly ramp up its questions for Federal Reserve Chair Jerome Powell about inflation and supporting the economy when he testifies on Wednesday and Thursday.

“This morning’s data just made Jerome Powell’s week much more difficult,” Matt Weller, global head of market research at the StoneX Retail Division of Forex.com, said Tuesday. The argument that inflation will be transitory, “while technically … could still be right, it doesn’t mean this week’s testimony to an uneasy Congress will be any easier.”

The consumer price index soared a seasonally adjusted 0.9% in June after rising 0.6% in May, while the core rate also jumped 0.9% after a 0.7% gain in May. The headline number increase was the largest since a 1.0% climb in June 2008.

Economists surveyed by IFR Markets had estimated CPI to rise 0.5% and the core to climb 0.4%.

Economists anticipated an annual increase of 4.9% in CPI and 4.0% in core for the year.

Inflation is definitely trending higher, Bankrate’s McBride said. If you compare these numbers to 2019, to avoid the COVID impact, “CPI is up at a 3% annualized pace over the past two years -that’s up from 2.55% last month.”

Supply chain issues and pent-up demand are “more evident than ever,” he said, and base-effects “won’t wash out for another couple of months.”

Once again used car and truck prices surged, “and this alone was responsible for more than one-third of the increase in CPI,” he said. “We can continue to look at the increases in used car prices, rental prices for cars and trucks, and even airfare and dismiss them as unsustainable — but they’ve sustained for several months already,” McBride said.

“The debate about temporary or problematic inflation will continue for months and will grow more heated,” he said.

Berenberg chief economist for the U.S., Americas and Asia Mickey Levy, said, “The Fed may continue to argue that this spike is temporary, but inflation has risen far beyond its forecasts and the price increases are clobbering consumers’ wallets.”

If, as expected, “strong nominal spending growth persists after the current spurt as the economy reopens, then inflation pressure will also persist, reflecting higher production costs and business flexibility to raise consumer product prices,” he added. “Fueled by tons of pent-up demand and consumer purchasing power, it is starting to look more and more like a stylized cyclical inflation driven by excessive monetary and fiscal ease.”

Aleksandar Tomic, Associate Dean for Strategy at Boston College, said the pressures are not “letting up.”

“At this point, saying that this effect is transitory is likely more wishful thinking than reality,” he said.

Separately, the National Federation of Independent Business’ small business optimism index climbed 102.5 in June from 99.6 in May.

The net percent of owners who raised average selling prices increased to 47%, its highest read since January 1981.

Also released on Tuesday, the U.S. budget deficit grew to $174.2 billion in June from $132.0 billion in May. Last June, the deficit was $864.1 billion. A delayed tax deadline skewed last years’ numbers.

Economists predicted a deficit of $202.0 billion. The deficit year-to-date now stands at $2.2 trillion, down from $2.7 trillion at the same point last year.

Primary market to come
The Rector and Visitors of the University of Virginia (Aaa/AAA/AAA/) is set to price on Wednesday $300 million of taxable general revenue pledge refunding bonds, term 2051. Barclays Capital Inc.

On Thursday, Memphis, Tennessee, is set to sell $160 million of general improvement refunding bonds at 10:30 a.m.