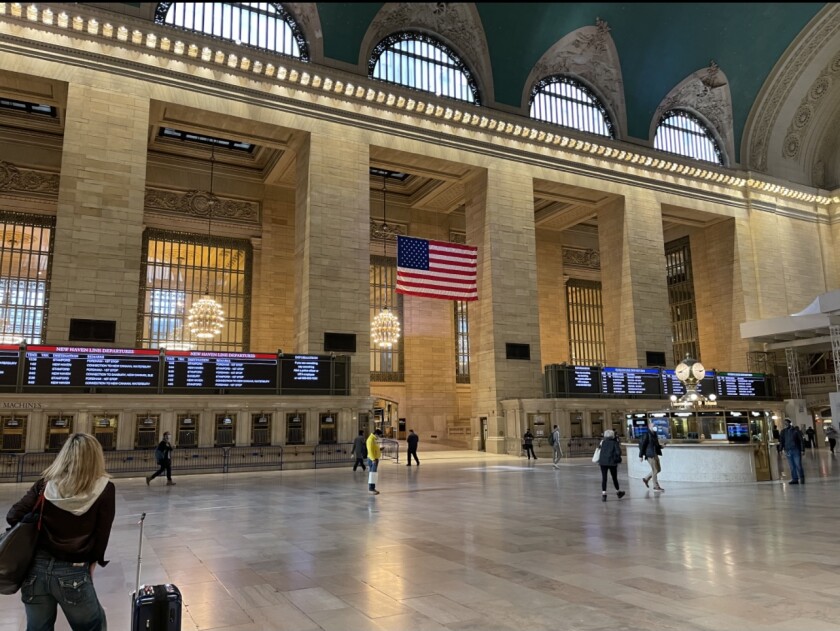 As businesses in New York City ramp up their efforts to get back to normal, where people will work and spend their time and money will have a long-lasting effect on city finances.

Will commuters’ spending routines return to pre-pandemic levels or have these been patterns been changed forever by the rise of remote work?

Depending on where they live, workers who don’t head into the city on a daily basis anymore could have an impact on sales tax revenues in New York, one of the biggest municipal bond issuers in the country.

If workers within the city and those commuting in from the suburbs return to the office five days a week, then things most likely will slowly return to normal. But that is not the expectation.

However, many firms are allowing workers to move onto a hybrid schedule — coming back two or three days a week while working from home the other days. Some firms are transitioning to all remote work. These options will cause a shift in tax collections.

A report released Oct. 19 by New York City Comptroller Scott Stringer, “The Impact of Hybrid Work on Commuters and NYC Sales Tax,” takes a look at the possible scenarios that may play out this year and next.

First off, most of those who work in the city also live there, and that’s 3.7 million people, according to Census Bureau’s American Community Survey. Working remotely for these residents will most likely only cause a “shuffle effect,” meaning their spending will shift from the office job site to their own neighborhoods, but leave tax revenues within city limits and the budget neutral.

However, around 1.04 million commuters who don’t live in the city and travel in to work, ACS data shows. Further, about 290,000 city residents travel out of the city to work.

In the case of commuters coming into the city, spending and taxes will be lower when they work from home while commuters who usually leave the city for work will now spend their money within it.

“In the case of commuters to the city, some of their daily spending will no longer occur in the city, thereby reducing city sales tax revenue,” the report said. “Conversely, city residents who commuted to workplaces outside the city will now be spending more time and making more purchases in the city.”

Based on recent surveys, businesses said employees will spend on average three days at the office and two days at home.

The comptroller’s office said its spending and sales tax impact projections were derived by multiplying the number of workers who could work remotely by their average weekly spend ($353) and the number of days they are expected to work remotely (2).

On a net basis the city could possibly lose $111 million in sales tax revenue annually, the comptroller’s office estimates.

“The exact nature of the changes in expenditure patterns is unknown at this time,” the report said. “Our baseline assumption is that spending that would previously have occurred at the office will now take place at home, dollar-for-dollar — although perhaps on a different mix of goods and services.”

Some thought the revenue loss could be understated.

“I applaud the comptroller’s office for doing their best to estimate the hit to the sales tax from all of the evolving work patterns,” John Hallacy, founder of John Hallacy Consulting LLC, told The Bond Buyer.

“The loss of $111 million appears to be on the low side,” Hallacy said. “One of the challenges to the assumptions is that the number of outlets in the city has remained constant. I would suggest touring the Upper West Side of Manhattan to see first-hand how many street level shops and restaurants have closed. It will take an extended period of time to refill those vacated storefronts.”

The report also said a shift in spending could hit certain businesses hard.

“It is important to note that even though the overall impact of hybrid work may be relatively small and offset from shifting local consumption patterns, these losses will have significant impacts on the many businesses who rely on office workers for their sales,” the report said.

The Citizens Budget Commission noted the far-reaching effects of the spending shifts.

“The comptroller’s analysis highlights the importance of commuters in supporting central district businesses, and by extension the city’s economic recovery,” CBC President Andrew Rein told The Bond Buyer. “Sectors that rely on commuters — stores, restaurants, and bars — continue to recover more slowly than other parts of the city’s economy.”

For many, remote work is not an option, including those in manufacturing or retail jobs. As this type of employment declines while service jobs gain, the negative impact on sales tax revenue could increase, the report said.

Longer term, the comptroller’s office said if increased remote work spurs residents to leave the city, the resulting loss in sales and income tax revenue would rise significantly as the tax base begins to decline.

“It should also be noted that those most likely to change residency would be precisely those workers employed in industries such as finance and business services, where incomes and spending are likely to be higher,” the report said.

However, people moving out of big cities may turn out to be a revenue-neutral event for states, according to a recent white paper from Franklin Templeton. And that’s because those who move will remain within the state.

“There’s been a notable influx of homebuyers leaving San Francisco and NYC — two of the nation’s most expensive cities — for affordable satellite towns and cities,” wrote Jennifer Johnston, director of research for muni bonds, and Ben Barber, director of muni bonds. “But this reshuffling is mostly taking place within California and New York state lines.”

Remote work flexibility, combined with high housing costs and crime, is dragging down in-migration for some of the high-cost metros. Out-migration from was concentrated in the most expensive cities, such as New York, San Francisco, Boston and Seattle, the white paper said. New York and San Francisco alone accounted for two-thirds of urban flight among the top-six metros.

Johnston and Barber said Sunbelt destinations, such as Florida, which were popular even before the coronavirus pandemic hit, only saw modest gains of in-migration. They cited Bloomberg CityLab data showing 84% of movers last year remained in the same metro area, 7.5% left but stayed in the state and 6% left the state altogether.

“To be clear, the bulk of last year’s reshuffling happened inside metro areas,” the white paper said. “For example, 20,000 Manhattan residents moved to nearby Brooklyn in 2020 — a well-known journey that’s been ongoing for decades.” In San Francisco, they noted the most popular destination to move to was Alameda County, which includes Oakland and Berkeley.

Work-from-home flexibility has also boosted moves to cities, towns and villages that are farther away from the city core.

“For example, in New York the river cities of Hudson and Kingston saw the biggest spike of in-migration nationally during 2020,” they wrote. “Before the pandemic, these areas were popular weekend getaways, but unpractical for weekday commutes into Manhattan. Given new remote-work flexibility, quite a few first-time NYC metro buyers ventured up into the Hudson Valley to bid on homes.”

The report said the COVID-19 pandemic apparently pushed up the timeline for some people to make the move to owning from renting and caused homebuyers to look outside the New York City metro area while still staying within driving distance of the city.

“It’s worth noting that a shrinking city population doesn’t automatically lead to municipal credit downgrades,” Johnston and Barber said. “Sudden migration shifts can be a blessing and a curse. After hurricane Katrina in 2005, the city of New Orleans saw its credit quality eventually surpass its pre-Katrina ratings despite a sustained population loss.

“Indeed, in expensive cities like New York, some population loss might be welcomed if it cooled the city’s overheated housing and rental market,” they said.

Still, many suburbs which saw a surge of new residents are now having growing pains and this will have an impact on infrastructure and spending. A sudden influx of residents can trigger costly infrastructure upgrades that are hard to scale up quickly, they said.

“Take Kingston, New York, which is about 100 miles north of Manhattan. Last year, the city experienced one of the biggest upward shifts in net in-migration in the United States, second only to nearby Hudson,” Johnston and Barber said. “Julie Noble, who works as a sustainability coordinator for Kingston, notes the city wasn’t prepared to handle the influx of new residents. The city now likely needs to upgrade its sewage system (an expensive undertaking) whereas new residents are more interested in establishing dedicated bike lanes. Thus far, Kingston’s growing pains are relatively mild.”

This isn’t always the case.

“In his research for the Fed Bank of Cleveland, Stephen Whitaker argues that housing costs (rather than taxes) have likely been ‘the most important factor pushing people out of the high-cost’ metros,” they said.

About 45 minutes east of Sacramento, houses in Placerville, California, likely seemed attractive to remote-working Bay Area residents looking to move because they were large and relatively cheap. However when large amounts of people moved in, costs went up.

“Across the country, the migration to low-density, car-dependent suburbs like Placerville has driven housing prices up over 30%; roughly double the increases seen in transit-dependent metros,” according to Johnston and Barber.

“This also reminds us that the restructuring of work itself may have far reaching effects for office space utilization and financing of our transit system among others,” CBC’s Rein said.

Small Account Options Strategy with a Big Return on Investment
5 Perfect Earnings Charts
Should You Hide Out in Wal-Mart’s Stock?
Stock Trading Mistake: When You Are Right, But Still Lose
First Solar (FSLR) and Saia (SAIA) Are Aggressive Growth Stocks