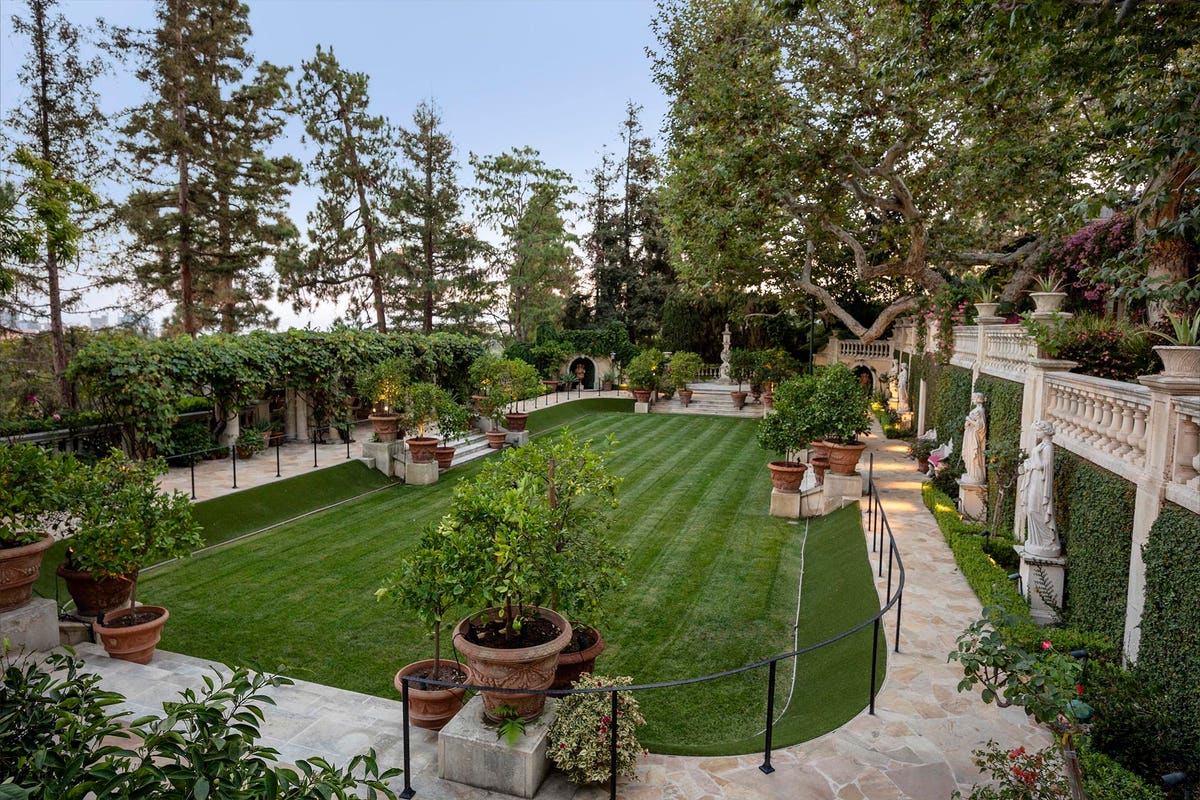 A grand estate can serve as homage to the architect, the interior decorator or even the landscape designer – long after they are gone.

This Tuscan-style villa in the heart of L.A.’s lower Bel-Air neighborhood is in many ways a tribute to all three.

Built in the late 1920s, the residence is credited to early architect Mark Roy Daniels, who was a master planner for Bel-Air and influenced by his travels abroad. As a city planner, he shaped communities in the San Francisco and Monterey Peninsula areas as well.

The interiors are from the creative mind of 1980s influencer Kalef Alaton, who employed artisans from Tuscany and the Amalfi coast to give the villa an authentic Italian ambiance. Lauded as a “design legend” and “ahead of his time,” he had an affinity for 1920s glamour and Mediterranean style.

The parklike grounds, which include expansive lawns, formal gardens and specimen trees, are part of the legacy of landscape designer David Jones.

Jones, who frequented the White House arranging flowers for first ladies Mamie Eisenhower, Jackie Kennedy and Betty Ford, became the personal florist to and a confidant of Nancy Reagan. His romantic floral displays caught the attention of Hollywood, and his celebrity client list would expand to include Elizabeth Taylor, Tony Curtis and Joan Rivers.

Set behind hand-forged gates, the residence is accessed by a circular motor court.

A dramatic beamed ceiling foyer with terracotta and white marble flooring sets the tone for the classic villa.

The formal living room is a study in detail with its ornate, hand-painted beamed ceiling and one of the home’s six carved-stone fireplaces. Floor-to-ceiling arched French doors open to a veranda with a fountain and flowering vines.

The formal dining room is encased with floor-to-ceiling windows and French doors that access a loggia.

A large intricately painted skylight tops the coved ceiling in the paneled library, which is lined with red-hued cabinetry sealed with 17 coats of lacquer.

A standout space among the 10,607 square feet of interiors is the orangerie – an elegant room for entertaining with vaulted glass ceilings, marble floors and a brasserie-style bar. Tall arched windows look out on the gardens.

The primary bedroom suite looks like it came out of a Palladian villa in the Veneto region of Italy. A team of artists from Rome hand-painted the frescos that adorn the domed ceiling, walls and wood floors.

The suite’s arched French doors open to a private patio with a fountain. Dual bathrooms, cedar-lined walk-in closets and a sitting area with a fireplace complete the space.

Stairs lead to the second floor with additional bedroom suites and a family room featuring an exposed wood-beamed ceiling, a fireplace and a terrace. Rooms overlook golf links and the red tile roofs of UCLA.

Additional features include a four-car garage, a bonus space, two offices and a gym with a bathroom for a total of six bedrooms and nine bathrooms.

Hilton & Hyland is a founding member of Forbes Global Properties, a consumer marketplace and membership network of elite brokerages selling the world’s most luxurious homes.