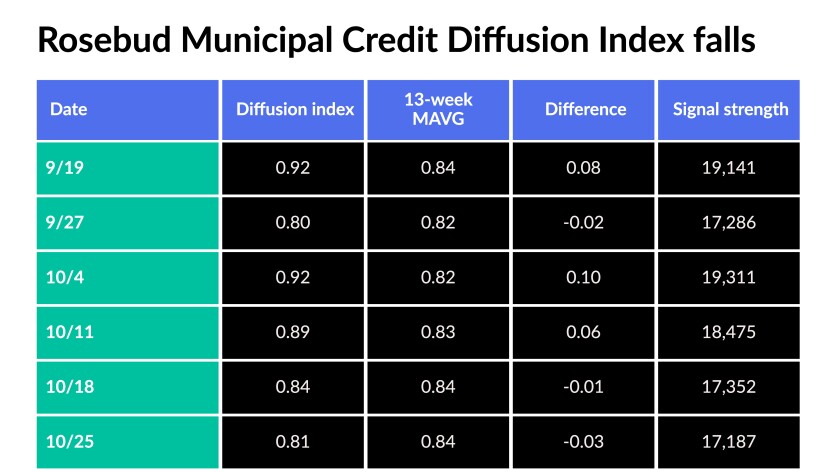 Municipals saw yields rise in spots along the curve, mostly inside of 10 years, as secondary trading picked up, and more bonds were out for the bid.

U.S. Treasuries moved to lower yields and equities ended in the black.

Supply is a factor along with elevated bids wanteds ($628.29 billion on Monday and $628.08 on Friday) with similar figures reported Tuesday and trading was up 6% over Monday’s levels.

Rosebud Strategies Credit Diffusion Index falls
The index has fallen now for three consecutive weeks for the first time since May. The previous week saw a significant decline from 0.92 to 0.83, while in the most recent week the index fell by 0.02 to 0.81. The current reading of 0.81 is the lowest in six weeks.

The index, and its 13-week moving average, have now fallen measurably below the 12-month trend line of the Municipal Credit Diffusion Index.

In late trading, Treasuries were firmer on the 10- and 30-year and equities were up near the close.

Despite rising prices, consumers remain willing to spend, but supply chain issues may tamp their ability.

The Conference Board’s consumer confidence index unexpectedly climbed to 113.8 in October from 109.8 a month earlier. The present situation index rose to 147.4 from 144.3, while the expectations index increased to 91.3 from 86.7.

Economists polled by IFR Markets expected a 108.8 reading for the confidence index.

“This is the first improvement in consumer confidence since June, and is likely partially due to easing concerns about the spread of the Delta variant,” said Scott Anderson, chief economist at Bank of the West.

Respondents said they were more likely to buy a home, auto, or major appliance, “pointing to a solid upcoming holiday season, if retailers can sufficiently restock shelves,” he added.

Of course, a bump in spending could add to inflation expectations. “Consumers’ are expecting inflation to average 7.0% in 12 months, the highest since July of 2008,” Anderson said.

Meanwhile home sales and home prices are on the rise.

New home sales surged 14% in September to an 800,000 annual pace, well above the 755,000 expected. While the S&P CoreLogic Case-Shiller home price index showed prices gained 19.8% on a year-over-year basis in August.

“Those who are looking to purchase a home are facing bidding wars and competing against all-cash offers,” said Grant Thornton Economist Yelena Maleyev. “The share of first-time buyers has fallen to the lowest rate since 2015 while all-cash sales made up almost a quarter of sales in September.”

“First-time buyers are being priced out,” she said. “As high material prices and labor shortages continue to drive up the cost of housing, any rise in mortgage rates will be felt by those looking to purchase a new home.”

The Philly Fed non-manufacturing index’s general activity index at the firm level recovered most of the 15 points it lost in September. “Firms reported overall increases in full-time and part-time employment,” the report said.

The Richmond Fed reported better activity in both manufacturing and services. Manufacturing “survey results indicate that many manufacturing firms increased employment and wages in October but finding workers with the necessary skills was difficult,” the report said. The trend is expected to continue.

While prices paid dropped in October, prices received rose, with respondents expecting to both to slow in the next 12 months.

In the services sector revenue and demand indexes gained while the local business conditions index stayed “fairly flat.” But expectations are for improved growth in the next half year.

Firms upped wages, while more firms added workers than lost them, although “many struggled to find workers with the necessary skills,” the survey said. “They expected this difficulty to persist and employment and wages to continue to grow in the coming months.”

“Wage pressures picked up to their highest levels on record in the survey’s history, while price pressures also increased and are near historical highs,” said Christopher Slijk, Dallas Fed associate economist.

The Health and Educational Facilities Board of the Metropolitan Government of Nashville and Davidson County, Tennessee, (A3/A///) is set to price Thursday $293.205 million of taxable revenue bonds (Vanderbilt University Medical Center), Series 2021A and 2021B. J.P. Morgan Securities.