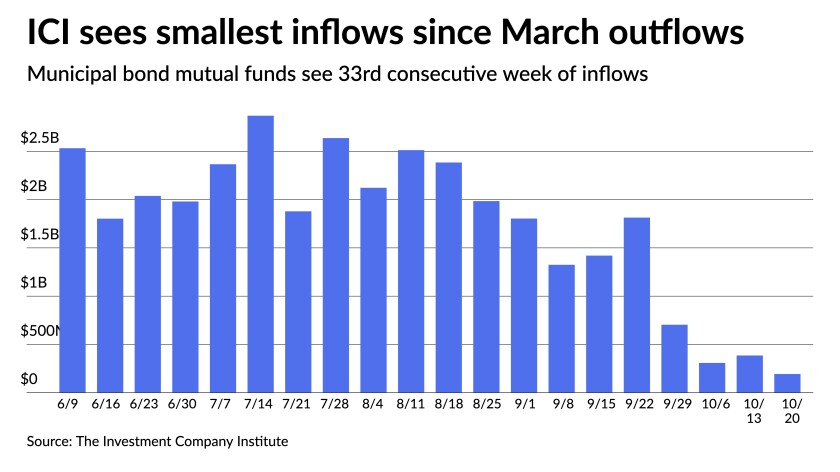 Municipals were stronger on the backs of a U.S. Treasury rally but underperformed the movements there, pushing ratios on the 10-year near 80% and the 30-year close to 90%.

Triple-A benchmark scales were bumped two to three basis points on bonds outside nine-years while the 10-year UST fell seven basis points and the 30-year fell 10 from a day prior.

The Investment Company Institute reported $193 million of inflows into municipal bond mutual funds for the week ending Oct. 20, the lowest since the single week of outflows in March. It was the 33rd week in a row of inflows, but down from $385 million the week prior.

Exchange-traded funds saw $262 million of inflows, up from $124 million a week prior. Total inflows have hit $76.8 billion year-to-date.

The primary was more the focus Wednesday.

The average seven-day simple yield for the 150 tax-free and municipal money-market funds sat at 0.01%, the same as the previous week.

In late trading, Treasuries were firmer on the 10- and 30-year and equities were mixed near the close.

Taper, then what?
It’s clear the Federal Open Market Committee meeting next week will end with a taper announcement, but the story doesn’t end there.

“I think tapering will have minimal impact on inflation,” said Lon Erickson, portfolio manager at Thornburg Investment Management. “It will more likely have an impact on financial markets as the liquidity is extracted.”

And things should go smoothly, he said, unless the Fed deviates from what the market expects, the “both the yield curve and risk asset prices could be in trouble.”

While no taper tantrum is expected, volatility is possible, Erickson said. “The record amounts of liquidity helped push asset prices higher as it was being injected so I don’t think it’d be reasonable to expect no impact as its being withdrawn.”

With inflation unchecked, the Fed will be forced to aggressively hike rates next year, he said, with a “50% chance of a recession in 2022.”

“The housing sector is the critical area of the economy that Federal Reserve policy impacts as 10 of 11 post WWII recessions were caused by tight Fed policy cratering the housing market,” he said. “The housing sector represents almost 20% of U.S. GDP.”

Thornburg’s Erickson said it’s too soon to determine if the Fed is behind the curve, “but risks are certainly tilted in that direction.”

The Fed never defined what they meant by transitory inflation, but it has continued longer than they expected. “And the problem with that,” Erickson said, “is, while inflation expectations remain anchored, the longer ‘transitory’ inflation (in addition to non-transitory pricing pressures such as wages and home prices) continues the less anchored those expectations will become and the Fed could then have a real mess on its hands with a vicious inflationary cycle.”

Another issue is market reaction, he said. “If the market loses confidence in the Fed’s ability to control inflation, and inflation expectations, then the markets will start barking back in a major way.”

“The Fed missed its window for monetary policy to have much impact and now needs to play catch up or at the very least appear to be more realistic regarding inflation,” said Bryce Doty, senior portfolio manager at Sit Investment Associates. “It’s disappointing and even comical to hear members of the Fed and even some economists claim that inflation pressures are more than anyone expected when many (us included) have been calling for shortages to continue to steadily worsen at least through the year-end holiday shopping season since last spring.”

He called it “ironic” that inflation caused by a worker shortage is addressed by “removing stimulus when they would typically be trying to enhance employment by stimulating the economy.”

But, Doty said, the Fed chooses “strategies that would reduce demand; not that it will make a difference given that there is so much pent-up demand and excess savings.”

Rate hikes, Thornburg’s Erickson said, will be needed to halt inflation. The market has begun pricing in rate hikes next year, he said, “perhaps losing confidence in the ‘transitory’ nature of inflation.”

Liftoff is expected late next year, but Wilmington Trust Chief Economist Luke Tilley said, Wilmington is “on the watch for earlier hikes if inflation surprises to the upside.”

Fed officials “are taking great pains to prevent markets from pricing in immediate rate hikes once the taper is complete, which is sincere and appropriate, but if inflation surprises to the upside they would certainly be willing to hike in mid-2022 in our view,” he said.

Supply chain issues continuing or firms raising wages to attract workers risk inflation growing, he said, but that’s not his base case. “We expect inflation to slow as purchases of goods are slowing and alleviating some of the price pressure.”

Wage pressures, he said, have crept into “mid-wage levels” lately, and it could continue to spread. But, increased productivity “mitigates some of that [wage] pressure.”

And ports in this country have “unloaded about 20% more containers year-to-date through August than in 2018 or 2019, even though jobs in associated industries” have dropped by 40,000 since before the pandemic,” Tilley said.

Jeffrey Cleveland, chief economist at Payden & Rygel, doesn’t expect liftoff until 2023. “If they only end their asset purchases by next summer, I don’t think there’s time” to fit in a rate hike before yearend, he said on a Bond Buyer podcast. “I think they’ll want to wait three to six months to see the impact of tapering on the economy.”

Count Grant Thornton Chief Economist Diane Swonk among those who see the Fed being aggressive. “We are betting that the Fed moves to dampen inflation sooner and more aggressively in 2022, to hedge against inflation becoming entrenched,” she said. “That would mark the first time that the Federal Reserve chased inflation since the 1980s. Since then, the Fed has been preoccupied with preempting a nonexistent surge in inflation. The pandemic continues to distort our world.”

In data released Wednesday, durable goods orders fell 0.4% in September, while excluding transportation, orders grew 0.4%. Economists polled by IFR Markets expected a 1.0% decline in the headline number and a 0.4% climb in ex-transportation.

“Investment is robust and provides a much-needed boost to productivity growth,” Swonk said. Those gains and a rebuilding of inventories will eventually help alleviate the upward pressure on overall inflation but not soon enough for the Federal Reserve.”

The Health and Educational Facilities Board of the Metropolitan Government of Nashville and Davidson County, Tennessee, (A3/A///) is set to price Thursday $293.205 million of taxable revenue bonds (Vanderbilt University Medical Center), Series 2021A and 2021B. J.P. Morgan Securities.