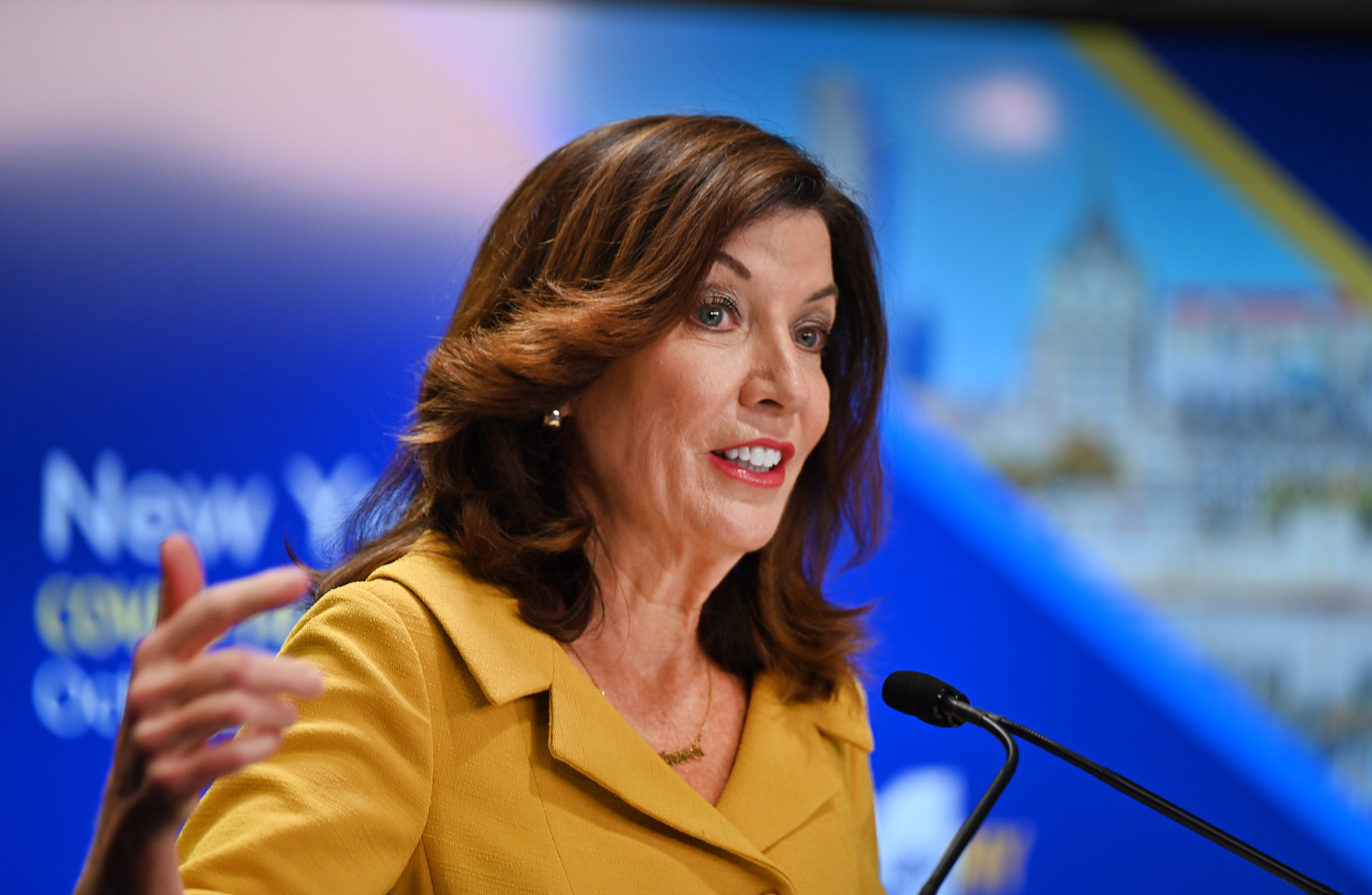 Hochul on Thursday announced transparency plans for more than 70 executive agencies and changes to the Freedom of Information Law process. It piggybacks on her signing a week ago of the MTA Open Data Act.

Hochul, who succeeded Andrew Cuomo in late August after he resigned under pressure amid sexual harassment allegations, released full recusal policies by which she is abiding, as well as those for the lieutenant governor and the secretary to the governor.

Maria Doulis, deputy comptroller for budget and policy analysis and a former vice president of the Citizens Budget Commission, ran point on the project.

“It really is in response to many of the questions we’ve been getting,” DiNapoli said on a Bond Buyer podcast. “With all this money in, billions of dollars, where is it going and how do we track it?”

DiNapoli said the portal will enhance the state’s credibility with the federal government. “They’re going to want to know, did the money go out the door and did it provide the benefit use that was anticipated?”

The tool “gets the top-line numbers in a way that’s easy to understand,” Fauss said. “Budgets are not an easy thing to track.”

DiNapoli said his staff worked through challenges to make navigation as easy as possible.

“Not all the money flows through us. Some of the money does not. But this federal COVID tracker, as we’re calling it, is really a first effort to try to get a handle on it, these dollars and the spending.

“We think it’s user friendly and we’ll see if there are any bugs to work out.”

Transparency regarding the spending for and accounting of federal relief money, has been a challenge since the pandemic took hold 18 months ago.

In Massachusetts, the commonwealth’s discontinuance in August of its weekly pandemic-related health report raised the ire of the Pioneer Institute.

“The commonwealth has a less than stellar record when it comes to disclosing COVID-19 cases and deaths at individual nursing homes and assisted living facilities,” the Boston-based think tank said. “The weekly report was an important resource for elders and their families making vital decisions between eldercare facilities during a pandemic.”

The Pandemic Response Accountability Committee, established under the Coronavirus Aid, Relief, and Economic Security Act, or CARES, found more than 15,400 awards worth $33 billion with “meaningless descriptions that make it difficult to know how COVID-19 relief money was used.”

Oversight.gov, a website containing public reports from federal inspectors general who belong to the Council of the Inspectors General on Integrity and Efficiency, published the report.

The Oct. 19 report included five recommendations from the accountability committee to help improve the transparency into COVID relief spending. CARES and other packages provided more than $5 trillion in response to the pandemic.

At least six states, including Texas, Florida and Georgia, provide even less information than previously, according to researchers at the COVID Behind Bars Data Project at the University of California, Los Angeles, which collects and analyzes data on the pandemic in corrections settings.

“Corrections systems cut back even more on public data in recent months, said Pew Charitable Trusts, which cited the project. “This happened even though prisons, like nursing homes, have been particularly susceptible to deadly outbreaks of the virus.”

Brad Lander, the Democratic candidate for New York City comptroller and a heavy favorite to win in Tuesday’s general election, called DiNapoli’s tracker a transparency model for use at the city level.

He said he intends to fully implement a bill he championed as a City Council member that called for transparency on all city capital projects.

Lander, in a recent televised debate against Republican Daby Carreras, said as comptroller he would track the $14 billion the city has received through the American Rescue Plan Act. “We’ve got to make sure we know what’s being committed against what’s one-time expenses and what’s recurring.”

The city has its own open-data portal, which has been in place for about a decade. Fauss called it a model at the local level. “There’s actually been some good work carried out by the Mayor’s Office of Data Analytics,” she said.

Fauss added that the federal government has effective systems that include the tracking of Freedom of Information Law requests through the Department of Justice.

The MTA bill Hochul signed on Oct. 19 requires the Metropolitan Transportation Authority, one of the largest municipal issuers with roughly $50 billion in debt, to publish its data in open formats that the public can easily access and download.

It requires the MTA to designate a data coordinator and gives the authority 180 days to publish as much of its data “as is feasible and legal” within three years.

“The largest public authority in our state, responsible for thousands of jobs, billions of dollars in capital investment, and a key contributor to our economy has to be reliable and accountable,” said state Sen. Leroy Comrie, D-Queens, a lead sponsor of the bill.

“We’re optimistic about the future of the MTA’s transparency,” said Lisa Daglian, executive director of the Permanent Citizens Advisory Committee to the MTA. “Access to more information and data is important both for riders and for accountability within and about the MTA.”