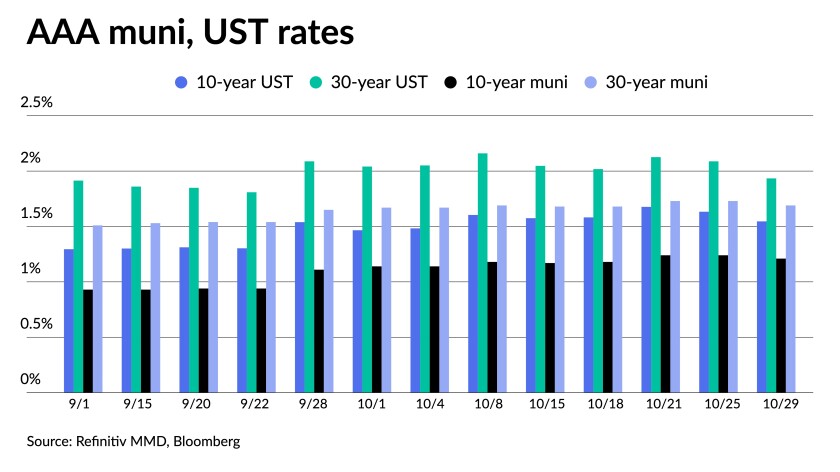 Municipal bonds were lightly traded and benchmark yields steady to end October while U.S. Treasuries bounced throughout the trading session, ending stronger near the close, and market participants are pointing to near-term volatility for both asset classes going into November.

In the near-term, the upcoming Federal Open Market Committee meeting should contain “an intense discussion of inflation,” and a clearer picture of the Fed’s views there. Most participants agree volatility in U.S. Treasuries will be a leading factor for municipal market performance.

Uncertainty in Washington also isn’t helping the asset class, with some analysts pointing to October’s 51% drop in issuance as part of the reason for it. And throwing another wrench into demand is a potential for a new corporate tax increase to pay for the latest iteration of Build Back Better legislation that will hit muni demand from banks and insurance companies.

As for the muni market outlook, “near-term trading will likely remain somewhat challenging, and the market feels a bit heavy, due to poor liquidity, rate volatility, heightened rate hike expectations (at the moment, two hikes next year are fully priced in) and much slower fund inflows,” Barclays strategists said in a Friday report. “Historically, muni performance in October and the first half of November is frequently somewhat challenging, and only in late November or December does the market start to perform.”

But as dealers “continue to position defensively, fund flows have slowed meaningfully and rate volatility and uncertainties on the policy front are keeping investors at bay,” they said, adding the muni market will “likely remain choppy near term, but we still expect it to end the year on a strong note.”

Muni market levels appear “stuck” absent clarity on muni provisions in the infrastructure/reconciliation bills, a Friday BofA Global Research report said. “Despite the large up-and-downs of the 10-year Treasury yield, 10-year AAA muni rates hovered around our yearly target of 1.20% for more than a week.”

Next week’s supply totals $4.991 billion with $3.973 billion of negotiated deals and $1.018 billion on the competitive calendar.

“This is roughly equal to expected monthly issuance. However, mutual funds flows have turned small, but still positive. So new supply and new demand should be roughly balanced next month,” the report said.

Fund flows are still being closely watched but many participants do not expect pressures to lead to outflows.

Much like February and March, mutual funds flows slowed considerably in September and October as muni rates rose, the BofA report said.

“If our constructive view of muni rates works out, these flows are less likely to turn negative consistently. However, if the 10-year AAA rate moves meaningfully higher from current levels, flows may turn negative,” the report said. “We established a few years ago that, historically, if the 10-year AAA rises 50+ bps and stays high, muni mutual funds would experience a sustained period of outflows.”

In late trading, Treasuries were firmer and equities were down near the close.

Inflation
Inflation remains at the forefront and the narrative has become that price pressures are mostly transitory but at a higher rate and for a longer duration than originally expected.

“This presents a ‘rates versus levels’ dilemma,” said Paul Gruenwald, global chief economist at S&P Global Ratings. “While the rate of inflation will come back to the policy target next year, the level of consumer prices will be permanently higher on the order of almost 4%.”

Unless wages rise, he said, purchasing power will decline, as will consumer confidence. “This will slow demand growth and help to bring inflation back to target.”

Tapering asset purchases, seen as a prerequisite to raising rates, must happen, he said, and if the Fed moves faster than a $15 billion a month reduction, it “would be sending a clear signal that it is now seriously worried about inflation,” Scherrmann said.

The upcoming Federal Open Market Committee meeting should contain “an intense discussion of inflation,” he said. While the Fed seems to be more concerned about inflation than it was several months ago, it is “not keen yet to fight it aggressively with rate hikes,” Scherrmann added. “The narrative has changed, and verbal intervention may be the Fed’s first weapon.”

The employment cost index, released Friday, showed compensation rose 1.3% in the third quarter, the biggest in the series’ 20-year history, suggesting inflationary pressures are broadening. Companies have raised pay to attract workers as many have stayed on the sidelines for reasons related to COVID-19.

“While we expect wage growth to slow over the second half of 2022, as more workers return to the jobs market, the near-term pressure on labor costs will keep inflation elevated over the next few quarters and make it difficult to settle back to the Fed’s 2% target anytime soon,” said Wells Fargo Securities Senior Economist Sarah House.

This increase “is arguably more alarming for businesses’ bottom lines” than the average hourly earning attached to the monthly employment report, she said. “ECI is broader than the average hourly earnings series, incorporating public sector workers in addition to benefit costs. What’s more, the index controls for compositional shifts in the workforce, which have been unusually large over the past year.

And while these gains may prove “sticky” and help push up inflation, House said, in the spring a pickup in the labor supply “should help allay pressures in the back half of 2022, and along with ongoing productivity gains, keep labor costs from driving an unrelenting rise in inflation.”

And these numbers “offered little relief to wage pressures as the probability of high wage growth for next year came in at 46%, which is the likelihood that growth in average hourly earnings (AHE) will exceed 2.9% in a year,” said Wells Fargo Securities Econometrician Azhar Iqbal and economic analysts Sara Cotsakis and Karl Vesely. “It looks like in the near term employers will still need to pay the big bucks if they aim to get the help they need, which may add to mounting inflation pressures seen elsewhere in the economy.”

Although it’s too soon to say if the economy is heading for a wage-price spiral, “the Employment Cost Index data reveals a discomforting amount of wage acceleration in the third quarter that definitely keeps that possibility open,” said Scott Anderson, chief economist at Bank of the West.

Personal incomes dropped 1.0% in September more than the 0.1% dip expected by economists.

Personal consumption expenditures increased 0.3% in September and 4.4% year-on-year measures of the PCE to 4.4%, its largest gain since January 1991. Core PCE, the Fed’s preferred inflation gauge, grew 0.2% in the month and 3.6% year-over-year, a 30-year high.

Also released Friday, the University of Michigan consumer sentiment index rose to 71.7 in the final October read from 71.4 in the preliminary report, but down from 72.8 in the final September report, while current conditions slid to 77.7 from 77.9 mid-month and 80.1 in September, while expectations bounced to 67.9 from 67.2 earlier in the month, but lower than September’s 68.1.

Separately, the Chicago Business Barometer climbed to 68.4 in October from 64.7 in September. Economists expected a drop to 64.0.

The Successor Agency to the Redevelopment Agency of the City and County of San Francisco (/AA///) is on the day-to-day calendar with $107.34 million of taxable third-lien tax allocation bonds, 2021 Series A (affordable housing projects) (social bonds), serials 2023-2031, insured by Assured Guaranty Municipal Corp. Citigroup Global Markets.